Director Kathryn Bigelow (Point Break, Strange Days, The Hurt Locker) was married to James Cameron around the time she made Near Dark, which is probably why three of his preferred actors appear here: Bill Paxton, Lance Henriksen, and Jenette Goldstein. At one point the main character even walks past a theater which is playing Aliens. Meanwhile, another Cameron staple—semi trucks—features prominently in the plot.

Caleb (Adrian Pasdar) is a good ol’ southern boy who gives a ridiculously attractive hitchhiker a ride. Her name is Mae (Jenny Wright) and the chemistry between her and Caleb is immediately apparent if not initially hormonal. Their necking quickly turns into an accidental bite on Caleb’s neck which changes him into a vampire. Then he’s thrown into Mae’s world, which involves drifting from one town after another in order to stay in a fresh supply of blood. His worried father, played by Tim Thomerson (Trancers’ Jack Death), takes it upon himself to start scouring the countryside for his missing son.

It turns out Mae belongs to a very odd group of outlaw vampires who have some pretty clever (and pretty gruesome) methods of acquiring fresh blood. Homer looks like a young boy yet Jesse (Henriksen) calls him “old man.” Then there’s Goldstein’s Diamondback, who’s kind of the irresponsible mother of the group, and Paxton’s Severen might be the weirdest of the bunch. At one point Caleb asks Henriksen’s character how old he is and the response is: “I fought for the south.” Following a perfectly calculated beat, he adds with a smile, “We lost.”

I’m not even sure what that means, but I love it.

Near Dark is no more a horror movie than it is a western, providing the themes and violence we expect from both. The title doesn’t just describe the tone, but the cinematography as well. You’re going to have a very bad time trying to watch this one in a bright room. The picture below is about as bright as the movie ever gets. 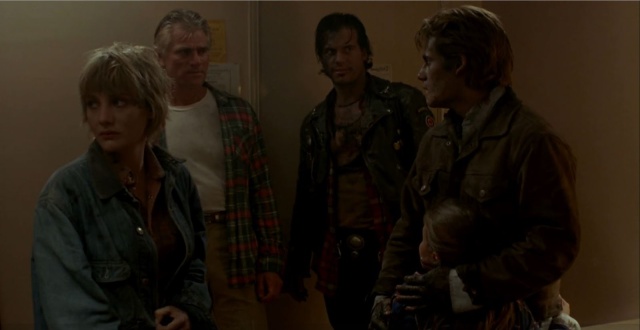 My favorite thing about Near Dark is how cool it is. It’s not much without its style, but that style happens to be great, especially coming from a director who was as young as Bigelow was at the time. There’s a punk rock energy about it and a downright contempt for convention. It’s probably the best of the 80s vampire flicks. It may even be the best movie I featured for 31 Days of Gore this year.

Recently, someone thought it was a good idea to market the film to the Twilight crowd now (see: Exhibit A). That’s like cramming a long list of keyword spam into a Craigslist listing—you’re wasting everyone’s time unless you’re specifically targeting your market. Yes, it has vampire romance, but the similarities end there.