Right off the bat I’ll mention we haven’t worked on our little movie in a while. All I can say is that’s been a relief. We probably won’t be working on it this weekend either, which means things have more or less returned to normal lately. Honestly, making a movie can suck. It takes far too much time from my writing… and, uh, video games.

a primer on dark energy
Our little movie also means I don’t always get to catch Science Friday, but I just listened to the May 10th episode. The show features Saul Perlmutter, a Nobel Prize-winning authority on dark energy (not to be confused with dark matter, dark energy is the force that’s responsible for the increasing speed at which our universe expands… or in other words the stuff that makes my most cherished science fiction novel of my teenage years slightly obsolete). Perlmutter joins Jill Tarter, the SETI astronomer Carl Sagan used as a basis for the main character in Contact.
Point #1 of this post: If you have a young daughter you can’t find many role models better suited than Tarter. She says when she was a kid she wanted to be an engineer because all the engineers she knew of were men. Hell, even if you have a son you can’t find many role models better than that.
I love it when scientists from two different fields come together (see: NDT and Richard Dawkins ask each other fundamentally simple questions). At one point Tarter suggests dark energy itself could be the result of some extraterrestrial technology. Perlmutter’s reaction to this is surprising because he actually agrees. I should point out that he quickly says he wouldn’t bet on it though; Tarter gets a kick out of this.
The scientists touch on something I’ve been thinking about a lot lately: a lot of people (and politicians) don’t understand the return value of curiosity-based research. I’ve always found time dilation to be the most amazing fact in the universe, but there are probably millions of people who think it’s “just a theory” (by my count this is the most irritating, ignorant combination of words in the English language) that doesn’t have a practical application. Perlmutter points out that without Einstein’s research entire industries wouldn’t exist, not least of which is global positioning systems, because they make practical use of things that travel at the speed of light. Tarter then hypothesizes about the existence of zeta rays, partly tongue-in-cheek, to point out that whatever we need to detect extraterrestrial life maybe hasn’t even been invented in our society yet. She says it’s going to be guys like Perlmutter and research in things like dark matter that will bring those technologies to us.
Again, here’s the link to the segment: Exploring an Ever-Expanding Universe. It’s a damn good listen.

1. It’s a horror-comedy. I wanted to write a comedy similar to Bill & Ted, Beavis & Butt-head, etc., but horror films are easier to market. That and I really miss 80s slasher films.

2. It’s not a slasher film per se. The killer carries a hammer rather than knife. I briefly considered buying the prop hammer used in Drive so I could promote the film with the following blurb: “STARRING RYAN GOSSLING‘s hammer from Drive!” But someone already bought the hammer and we wouldn’t have been able to afford it anyway. If anyone cares, Albert Brooks’s knives are still available for purchase.

3. The screenplay is currently around 59 pages long. That’s short for a feature-length screenplay, but what we shoot tends to be longer than the standard page-per-minute rule. Also, the original Evil Dead screenplay was 57 pages long. What I’ve cut together so far looks pretty good for a movie on a micro-budget. Actually, “micro-budget” is misleading. It’s more like a nanobudget.

4. It stars me and a friend from high school. His work schedule changes every week. We pretty much have to shoot around him. It also looks like we’ll alternate shooting weeks and prep weeks.

5. Most of the characters haven’t even been cast yet. Yeah, it’s ridiculous. I have no idea who will be playing my character’s girlfriend in the film. 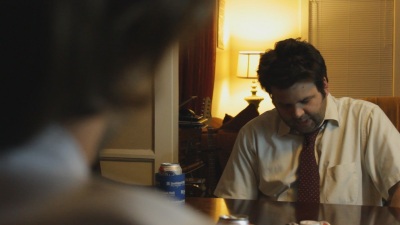 7. If you can afford it, you should probably shoot your movie in order as often as you can. People really get confused about where the current scene fits in the story and explaining it is a pain in the ass.

8. Having different lenses really matter. Luckily, I got to borrow some from a friend rather than renting.

9. Shooting an independent movie can be really fun. The rest of the time it’s the most stressful thing in the world. Some of my plumbing stories can make anyone wince. This week, there were times the stress from the movie was ten times worse than the stress I’ve ever gotten from plumbing. I may have had a heart attack at one point.

10. We shot a scene that was supposed to be an homage to Kubrick. I now know why Kubrick could spend weeks or months on a single scene. Don’t shoot like that guy unless you have unlimited time and funds.

It seems like we heard Neil Gaiman was going to write a Doctor Who episode two or three years ago. It’s finally here. For someone whose interest in the program petered out after Russell T. Davies and David Tennant left (the show got a little too kid-friendly and goofy for me, but I actually like Matt Smith as the Doctor), that was the best episode in years. Hell, I’d say it’s one of the best hours in TV history.

didn’t Gaiman say he disliked the cybermen?
As for the latest episode of The Office… well, the most positive thing to say is they probably picked the right time to go off the air.
So we shot some more scenes for the movie this weekend. We have around a quarter of the movie filmed and edited. Total budget so far? Less than $250.
We spare no expense.

I just saw last Thursday’s episode. It was a little heavy on the sentimental side, but I do enjoy the fact that Jim and Dwight are becoming friends. And I’m glad Andy’s gone. I really like Ed Helms, but his character has gotten pretty damn boring.

As for the movie we’re making, shooting today was cancelled due to lousy weather. We’ll be at it tomorrow.

Today I watched The Shining. It’s been a while since I’ve seen it. When I was younger I always liked Full Metal Jacket a little more, but it just doesn’t do it for me anymore for some reason. This morning I enjoyed The Shining more than I ever did before.

Live in Tulsa, Oklahoma? Want to be in a movie? Check out the casting call over at Gruelgo.com.

That is all for today, children. Class dismissed.