Skip to content
Weird Al is releasing one new music video a day on his website. This is the third. There will be eight. The only disappointment so far is the first two videos weren’t about food. This one is. Sort of:

My all-time favorite Weird Al parody, for reasons I can’t quite explain, is I Love Rocky Road. It’s just so wonderfully stupid.

I paid something like twelve bucks to see this movie the first time and now it’s free from Starz Media. There are commercials, unfortunately, and I can’t embed it, so you’ll have to click here to watch it. Let me tell you something: I love this documentary. It helps that I love Roger Corman movies, but anyone should be able to get a kick out of it.

On a related note, I saw Death Race 2000 again two weeks ago, which had me laughing as much as ever. Kids today with their Sharknados and other animal/disaster hybrids will never believe it: B movies used to matter.
You have no idea how much easier this makes my current science fiction novel, which is partially set on Mars. Perhaps “Academia” can publish their findings on Martian gravity, proving that it’s exactly as it is on Earth. That’ll make my life, and the production of several Hollywood movies, even easier. 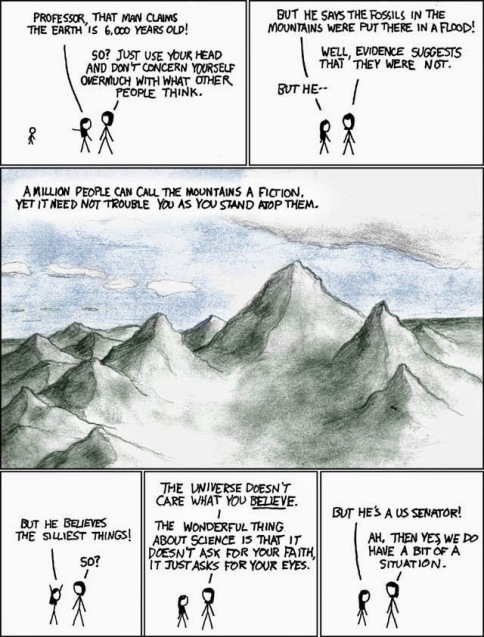 relevant xkcd
I know a lot of Kentuckians are probably ashamed of this guy right now, but as an Oklahoman, I’d argue my Senators are even dumber. Certainly seems they’re in the news for saying dumb things more frequently. So don’t judge a state by its senators. This is not a problem with the fine state of Kentucky, this is the problem with ignorant and/or lobbied politicians. To be fair, which is more than this twat deserves, I do believe him when he clarifies on Twitter that he had a brain fart, if only because I don’t want to believe anyone could possibly be so stupid. The problem is his statement still doesn’t make any sense. And if you’re going to become an obstacle to greenhouse gas regulations, making sense is probably the first fucking thing you should do.
This is not simple ignorance. This is pure, ought-to-be-publicly-shamed stupidity. There’s nothing wrong with disagreeing with science as long as A) you actually know and understand the decades of research you’re allegedly disproving and B) you provide actual evidence to back up your extraordinary claim. I don’t know why that’s so hard for people to understand: if what you believe is at odds with our highest form of understanding, the burden of proof falls on you. We’re not shutting you out because of some mass conspiracy. We’re shutting you out because you’re naive and gullible or, as in the senator’s case, a fucking idiot.
Either way, I would like to elect Senator Brandon Smith as the first President of Mars. We’ll just one-way ship him out there with the tens of thousands of people who’ve already applied for the unlikely Mars One project. He already reminded me of this applicant’s quote:

Ma Qing, a 39-year-old bookseller, said, “I think the chance to be part of the project is a cool way for me to change a dull daily life. Besides, the air on Mars must be much cleaner and easier to breathe.”

The only difference is Ma Qing, bless his little pumpkin heart, isn’t a fucking U.S. Senator and probably wasn’t afforded the education this twat chose to disregard.