Full Moon and Charles Band generated a lot of hype to promote Sorority Babes in the Slimeball Bowl-O-Rama coming to Blu-Ray. I don’t blame them. This is a cinematic relic which deserves to be preserved on the very best home video formats. You know, for historic purposes… and because of boobies.
I hate to fault such an admirable effort at unadulterated sleaze, but it takes damn near forever for the film to get around to introducing its villain: an imp who’s been trapped in a bowling trophy like a genie in a lamp—twenty-eight minutes, in fact. Once the genie’s out, you’ll wish he’d stayed there because the terrible puppet soaks up valuable screen time. Screen time which could have been better spent on naked bodies. Not that I mean to insinuate there’s a disappointing lack thereof.
What there is a disappointing lack of is blood and gore, horror and comedy, and most of all coherence. At least two of the kills involve shoving someone’s head into something (and out of sight of the camera). One of the babes is ripped in two without spilling a single drop of blood. Somewhere along the way, the imp magically transforms another sorority babe into Bride of Frankenstein.

It all begins when a trio of nerds and a pair of freshmen girls are trapped in a bowling alley as part of a college prank. There they meet a tough-as-nails biker babe who’s ripping off the cash registers and arcade machines. Unfortunately for them, they accidentally release the imp, who offers to grant each of them a wish. As we’ve learned in countless Leprechaun and Wishmaster movies, you should really be careful what you wish for.

The nicest thing I can say about Sorority Babes in the Slimeball Bowl-O-Rama is it has some of the finest T&A the 80s ever produced. Porky’s and Meatballs have nothing on this film, because those films didn’t star Linnea Quigley, Robin Stille, Brinke Stevens, and Michelle Bauer. I’m not being hyperbolic here: these are four of the best scream queens who ever lived. And although the film is reluctant to show any of its violence, I’m reminded of these words from Revenge of the Nerds: “We’ve got bush!” Lots and lots and lots of bush.

I’ve mentioned three Animal House ripoffs because Sorority Babes is in the same category. For reference, director David DeCoteau got his start with Roger Corman and later made what could very well be the hardest softcore porno ever featured on 90s Cinemax: the mostly lost, uncut version of Beach Babes from Beyond. Later in his career he defied convention by making the men the eye candy in his films. As one writer put it, “Although at first glance it’s not clear exactly who these films are aimed at—gay men? teenage girls? desperate housewives?—what is clear is that DeCoteau, who is actually a pretty talented filmmaker, knows exactly what he’s doing.” I couldn’t agree more with that sentiment. 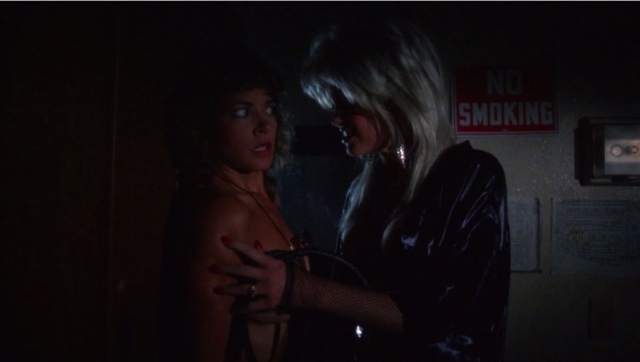 The thing about Sorority Babes is this: it is what it is. I actually prefer it to Porky’s and Meatballs and, hell, I might even like it a little better than Nerds. Then again, I adore 80s scream queens, so maybe I’m not the most objective person to review this.