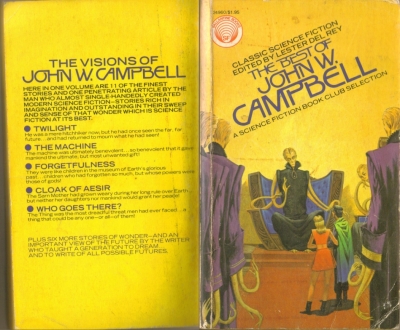 Introduction: The Three Careers of John W. Campbell by Lester del Rey
The Last Evolution
Twilight
The Machine
The Invaders
Rebellion
Blindness
Elimination
Forgetfulness
Out of Night
Cloak of Aesir
Who Goes There?
Space for Industry
Afterward by Mrs. John W. Campbell

Edited by Lester del Rey, this collection contains Twilight, the short story Campbell originally published under the pseudonym Don A. Stuart. As del Rey says in the intro, Campbell wrote pulpy stories, like almost every other SF writer at the time, under his real name. It wasn’t until later he developed the pseudonym Stuart, under which he wrote stories of a more serious vein. The first story in this collection isn’t of much interest (other than historical) as it is one of his earlier, more pulpy efforts, but the rest, starting with Twilight and more or less concluding with Who Goes There? (the inspiration for The Thing From Another Planet, John Carpenter’s The Thing, and the 2011 reboot/prequel), showcase his talents nicely.

As for Twilight, there’s something that must be said about a story that takes you 7 billion years into the future, especially when it was written in 1934 and seems so modern today. Unfortunately for me (but fortunately for everyone else on the planet) someone already wrote about it: Ryan Harvey over at Black Gate, a fantastical fiction blog. Read the article here. Says Harvey:

And yes, as the heading of this post indicates, to me the title “Twilight” always means this story. It had too potent an effect on me to ever allow anything else, no matter how much popular culture it devours, to steal the word “twilight” for other use.

In his memoirs I, Asimov, Isaac Asimov talks favorably of Campbell for the most part, later expressing his dismay over the editor’s decision to buy into L. Ron Hubbard’s Dianetics, the foundation of Scientology. Many writers who had been loyal to the man who once injected real science into science fiction began ignoring his publication, Asimov included. In his introduction to this collection, del Rey only briefly mentions Campbell’s disappointing foray into pseudoscience, simply stating, “His eternal quest for undiscovered fields of knowledge led him into what I considered cultist beliefs, and I fought against those both privately and publicly.”

I found the book in a used book store in Sand Springs, OK. I paid a dollar for it.