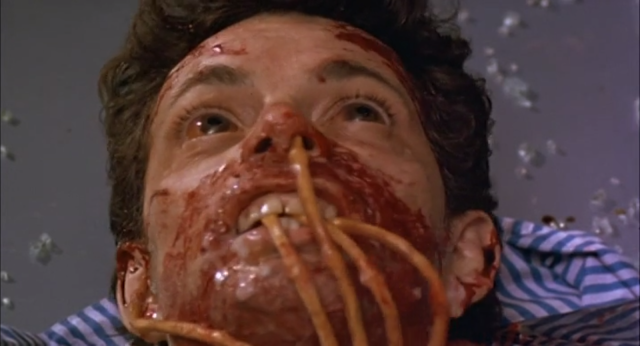 Last year I featured Street Trash. This year I’m featuring the similarly gross Body Melt. Maybe melt movies will become a bit of a tradition here on 31 Days of Gore. I don’t know yet. What I do know is the movie’s satirical look at our obsession with dietary supplements is more topical than ever. I’ve seen far too many (otherwise bright) people jump on board with complete and utter horseshit like this and they tend to be the ones who do it time and time again. Maddeningly, the problem seems to be getting a lot worse despite the fact we have better access to information than ever before.

What I’m saying is it’s time for melt movies to make a comeback. Today they could take on the anti-vaxxers, the helpless self-help trolls, and the annoying “get motivated” crowd, to name a few. There’s so much humor to be mined from the kind of “concerned” (paranoid) people who are constantly on the lookout for short cuts and disastrously short-lived bursts of feeling actualized, people who trade hard scientific data in lieu of celebrity advice and poorly defined “organic” labels. In our quest to never feel bad, we’re letting corporations and social media define what “bad” is so we can be sure our wallets are always on the lookout for the next miracle product or movement.
What was I talking about again? Oh yeah, a stupid horror movie. Body Melt opens with a sexy commercial for Vimuville, a pill company which promises its customers a better lifestyle. What the product will actually accomplish is vaguely worded, but hey, who wouldn’t want to feel better? An employee for the company plans to blow the whistle, at which point the product’s spokesperson (also the company’s mastermind) injects him with a lethal dose of their latest concoction. It turns out it’s not the dosage that’s the problem, it’s the stuff itself, and the company has already been feeding it to a test group at the end of a quiet cul-de-sac in Melbourne, Australia.
These unknowing participants, by the way, are screwed. From Wikipedia’s plot summary:

I mean, what more do you need? I was under the impression the whistle blower was the main character and this was going to be a body horror film along the lines of a Cronenberg film. Then, literally minutes later, he melts down in spectacular fashion before fatally smashing headfirst through the windshield of his car. To say Body Melt is protagonistically challenged is an understatement. Street Trash was like that, too, but this one is a lot more focused than that piece of art even though its mind is all over the place. It seems there are a lot of non sequiturs for the first 90% of the movie, but then it’s all wrapped up nicely by the time we get to the splatterific ending… for the most part, anyway.
Body Melt is a fine cult film. If that’s the kind of stuff you’re into, it’s required viewing. Just don’t leak on me, man.