Like a horror version of Midnight Cowboy, wide-eyed Duane Bradley arrives in the Big Apple with a wicker basket which is curiously padlocked. He checks into the first hotel he sees, the kind of place populated by degenerates and whores, and when he’s told his room will be twenty dollars he reaches into his pocket, produces a giant roll of cash, and thumbs through it for a moment before finally finding such a small denomination. The resident drunk perks up at the sight of this naive display, dollar signs gleaming in his eyes.

Later, Duane gets hammered at a bar and opens up to a hooker with a heart of gold: when he was a child, his hideously deformed Siamese twin, Belial, was separated from his body against his will. (When questioned about the ethics of such an operation, one of the surgeons said, “I’m not even sure that thing is human.”) Following the surgery, Belial was placed into a garbage bag and tossed out with the trash. After Duane rescued his brother, they murdered their father for separating them.

Today the duo is systematically revenge-killing the doctors responsible for their unwanted operation. Despite Duane’s naivety, the plan goes off without a hitch… until he falls for one of the doctor’s receptionists. Enraged with jealousy, Belial trashes their room and goes on a murderous rampage. Things only get bloodier and bloodier from there.

At this point I’m wondering who names their children Duane and Belial.

Basket Case is right up there with the small handful of movies which made me a thrill-popping horror fiend in the first place. If my movie collection had any organization to it at all, it’d be on the same shelf as Evil Dead and Re-Animator. It’s some seriously fucked up and funny stuff. 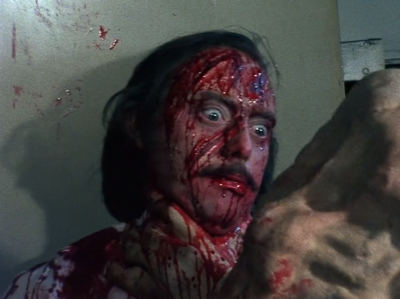 I’m surprised how well this sub-million dollar movie from the early 80s holds up. The make-up effects are more hit than miss and the stop-motion miniatures (whenever Belial hops out of his basket and goes for a stroll) are charming and, dare I say it, kind of cute. Amazingly, there’s not much fat to be found in the movie, the camerawork isn’t lazy, and we’re treated to one money shot after another with expertly paced swiftness.

I review the other two movies in the trilogy after the break. Spoilers for the first film ahead….

So director Frank Henenlotter picks up exactly where he dropped off: Duane and Belial have taken a nasty tumble from the fire escape of their New York City apartment, which apparently left them dead. (Didn’t that guy at the end of the first movie check Duane’s pulse and shake his head with finality?) News crews show up to the scene, exposing the Bradley Brothers’ murderous secrets for the entire world to see.

Meanwhile, Granny Ruth (Annie Ross) and her granddaughter Susan are watching the media fiasco on their living room TV. For reasons we’ll discover later, they decide to pack into their conspicuous van and make their way to the hospital where the boys are being kept under police surveillance. There’s also a snotty news reporter scheming to get inside the hospital for an exclusive interview, even going so far as bribing the cops. Unfortunately for her, Belial just woke up on the wrong side of his hospital bed and he’s killing everyone who gets in the way of his escape. He even takes possession of his brother to assist himself, despite the pair being on the outs.

When they make it to the parking lot, Granny Ruth and Susan swoop in and usher them into their van. It turns out Ruth owns a house which harbors many more freaks just like the Bradleys. Once there, Ruth separates the brothers, to minimize their fighting, and introduces Belial to a very special lady she keeps in the attic… special in almost the same way Belial is. Ain’t it cute?

Henenlotter, who’s obviously a huge fan of 1932’s Freaks, makes the all-American and normal-looking reporter the villain while Granny Ruth’s commune of monsters takes center stage. There are some wonderful creature effects here and I love how each freak’s appearance is a character in and of itself. The only problem is Duane, who absolutely anchored the first film, kind of plays second fiddle to the new additions. Actor Kevin Van Hentenryck is such a likable screen presence (and a much better actor this time around) I wish we got a whole lot more of him. This time his character is alternatively cunning and stupid, depending on what the plot requires, and he doesn’t shine until the last ten minutes of the film, which are twice as exciting as everything preceding it. Sometimes Basket Case 2 feels like an expanded prologue to the third film.

One thing I loved about the original Basket Case—because Jaws theory isn’t always right—is we get a glimpse of the monster relatively early on. This time we see him a little too soon, a little too often and, worst of all, a little too closely. Belial’s creature effects are technically better than they were the first time around (because sometimes there’s an actual human beneath that tumorous mass of latex), but the first film’s charm has begun to wear. My favorite thing about Belial in the first movie was his crazed scream. This time it’s just not the same scream and it would have been great to hear it when Belial makes love to his woman.

I did enjoy this movie, but it’s probably my least favorite Henenlotter film (I haven’t seen Bad Biology yet, but I plan to watch it later this month). Nothing in part 2 tickled me half as much as when Belial trashed the hotel room in the first movie.

Warning: Whatever you do, do not watch the spoiler-filled trailer for this one until you’ve seen the movie in its entirety! 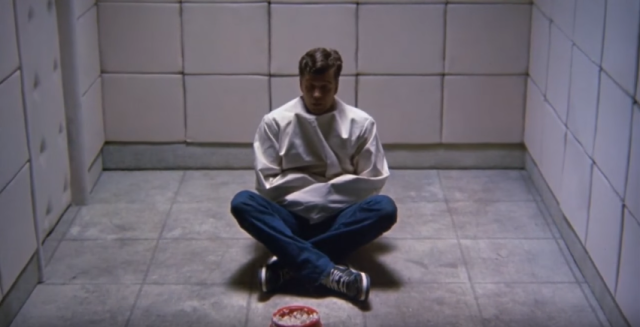 You’ve typically gone well past the point of diminishing returns by the time you hit the third film in a franchise. Nowhere else is this truer than in the world of horror. Bu unlike most directors, who typically abandon the franchises which made them famous, Henenlotter sticks it out until the bitter end. (He’s talked about making a Basket Case 4. The chances of that happening are probably somewhere in between Bubba Nosferatu and House of Re-Animator.) Right out of the gate, Basket Case 3 is much better than 2, even if it does start with an extended flashback sequence of the previous film’s ending. I think by including the best part of Basket Case 2, Henenlotter set the bar high so he had no choice but to push himself harder.

The good news is he’s up to the challenge.

Granny Ruth has been keeping Duane in a padded cell ever since we last saw the fucked up family. It turns out Belial and his love interest, Eve, are expecting. In response to this glorious news, Granny Ruth giddily decides to pack her merry little band of freaks into an old school bus and make the trek to her ex-husband’s house, a doctor who will deliver Belial’s baby. Since she can’t very well leave Duane in custody, Ruth begrudgingly drags him along for the ride, but bitterly refuses to remove his straight jacket.

Duane insists he’s no longer crazy, but we all know better, don’t we? Either way, Belial refuses to so much as acknowledge him. He’s a family man now. Can’t have his crazy brother dragging him down anymore.

Once they’re on the road, Granny Ruth leads her freaks in a fun little sing-along of Personality. And that, ladies and gentlemen, is the moment I fell in love with this movie. It sets the bar for high insanity and the film rarely misses a beat from then on out.

I’m going stop talking about the plot details here so I don’t ruin the surprises, which only get more outrageous as the film goes on. I don’t know why Henenlotter shifted focus from Duane to Belial and then Granny Ruth over the course of the three films, but Annie Ross’s character is an endearingly irreverent hero who gets a little more fleshed out with the reveal of the life she once had long before she started harboring freaks. I don’t know, it all kind of makes sense now. 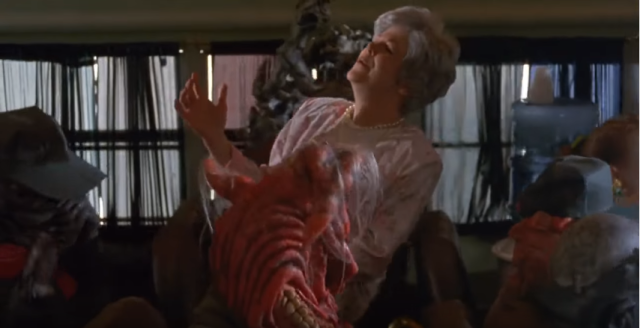 As usual, the film that started it all is the best, but the Basket Case trilogy is a remarkable franchise, drawing its strength from character/actor continuity and consistently high quality. If Henenlotter does make a fourth one, I can only hope he returns his focus to Duane. I just love seeing that guy in movies.