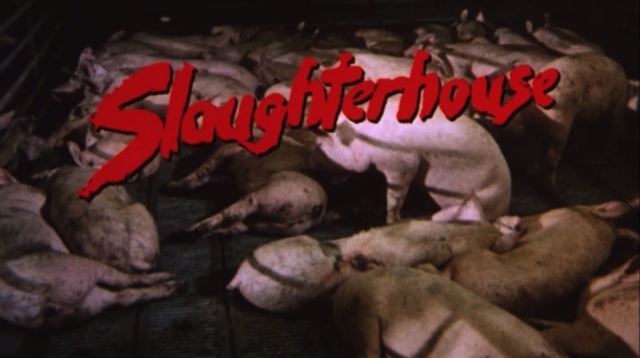 Slaughterhouse starts out promising enough. Right off the bat you get stupid teens doing stupid teenagery things in the middle of nowhere. Just before you begin to yawn, a couple of the kids split off of the main group to go get themselves killed in the woods. You don’t see much, but it is, after all, only the first slashin’. Even then it’s already shown us enough to make us believe (or hope) each money shot will top the last.

Following the cold opening, the film smash-cuts to its credits, which overlay actual footage from day-to-day operations at a real slaughterhouse. This disgusting scene is scored to silly music. It’s at this point you think the movie could very well become a great dark comedy. It may even have something to say.

So the killer is Buddy, a giant of a man who doesn’t bother wearing a mask until the end of the movie. How’s that for switching things up? He’s the dimwitted son of Lester Bacon, an old farmer whose house is being foreclosed. Lester is so distraught by the news, he not only doesn’t give a shit Buddy is killing people, he encourages him.

Then there’s the teenagers of the film. They don’t really do much of anything. They’re under no threat until the end, when their mostly pointless subplot finally crosses paths with Buddy. In the meantime, Buddy kills the town deputy, dons his clothes, and goes for a joyride in what proves to be the film’s funnest scene. If only the rest of the movie were so good. 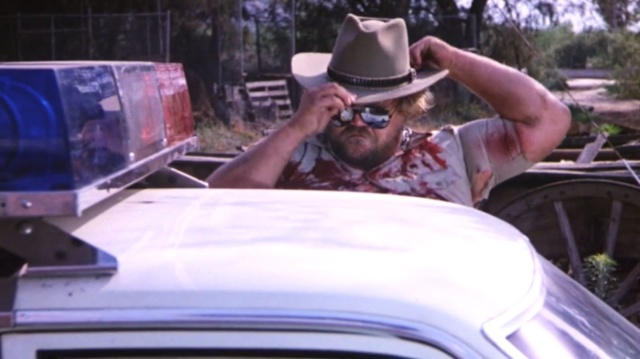 Beyond the teen stuff, Slaughterhouse isn’t a slow movie. There’s even decent acting, dialogue, and an oddly effective pace. You hold out hope the opening set the bar low in order to top itself. It never really does, at least in no spectacular fashion. Yet it’s still kind of likable for reasons I can’t really put my finger on. I guess I just kind of like Buddy.

I do have to complain that the final kill in the movie shows even less than the first kill did. What a cheat.