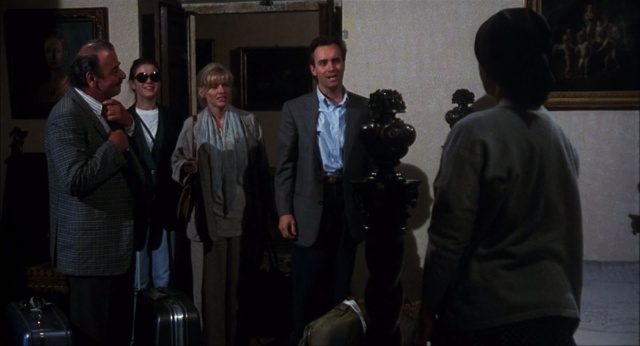 A quick update: Yesterday I got a new arcade cabinet. You can check out the pictures on my Instagram account. It’s a Pacman which has been converted with a lame Driving Force kit. I plan change it back into a Pacman cabinet, but for now I’ve got 60-in-1 parts ordered. I don’t think the monitor is in bad shape, but I could be wrong. As for my original arcade project, it’s mostly done. I’m just waiting on some new buttons to come in and haven’t decided on the color of T-molding.

Last year’s 31 Days of Gore really renewed my interest in Full Moon movies. This one stars B-movie icons Jeffrey Combs and Barbara Crampton (my all-time favorite scream queen), who also appeared together in The Re-Animator and From Beyond. I was probably a teenager the first time I saw Castle Freak and thought it was the weakest of the Stuart Gordon movies. This is because teenagers are stupid and don’t know shit.

Combs, Crampton, and their blind daughter inherit a castle. How did they inherit a castle? Doesn’t matter. What matters is there’s a mutilated freak living in a tiny dungeon beneath it. Towards the end of the movie, Combs will have a House, M.D. moment in which he pieces together scant clues into the freak’s backstory. Until then, we never really know why the titular monster is living in the bowels of the 150-room castle, but the reveal is a doozy.

In the meantime we’ll learn the daughter wasn’t always blind and there used to be a son in the family. It turns out Combs is an ex-alcoholic who was drinking and driving the kids around on a rainy road one evening. The ensuing wreck killed his son and blinded his daughter. Needless to say, Combs’s accident put a strain on his marriage. Stupidly, he hopes moving into the castle will rekindle things, but Crampton’s character is having none of it.

Meanwhile the freak is lurking in the shadows, curiously watching his unexpected house guests. Unfortunately, he’s getting just a little too curious about the birds and the bees. This is not good for the blind girl. 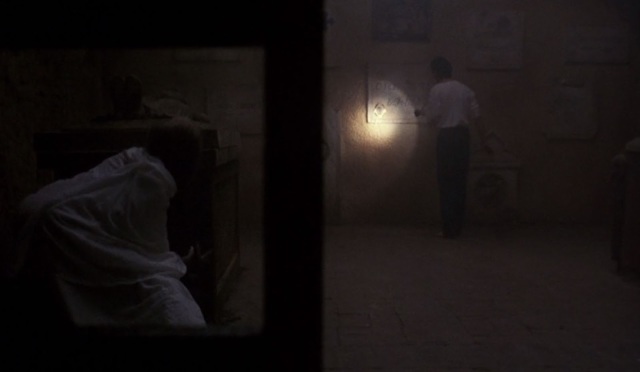 Crampton said in a recent interview that she and Stuart Gordon found a new appreciation for the film the last time they screened it. I have, too. The creature effects are nearly perfect from beginning to end while Combs and Crampton give great performances. I’m not saying they’re good performances for a cheap horror movie. They’re good performances, period. The cops are borderline dumb, but not as dumb as they are in most horror movies, and the parents take a little too long to believe their daughter when she tells them about a run-in with the monster. Beyond that, this is a very mature film and its only limitations come from a small budget.

Sure, it’s the slowest of the Combs-Crampton-Gordon-Lovecraft trilogy, but it’s the most effective at heebie-jeebies. This is a straight-up, humorless horror movie. And it’s a pretty great one at that.