They could have fixed 70% of my problems with Bram Stoker’s Dracula if they had just called it Francis Ford Coppola’s Dracula. The problem isn’t that the movie isn’t as good as the book—that’s just par for the course. The problem is, with a title like that, you’d expect them to take far fewer liberties than they did, especially considering the novel itself was remarkably cinematic for its time.

The scene in which Dracula is spotted crawling across the wall is chilling in the imagination, but it’s lacking something on the screen. Likewise, there’s some great visual effects, but Coppola leaves them on display for too long while Keanu Reeves somehow manages not to react whatsoever. I appreciate the shameless use of old fashioned sets and sound stages, but the look of the film hearkens back to previous film adaptations even though the bold title suggests it’s intended to be more novel than movie. 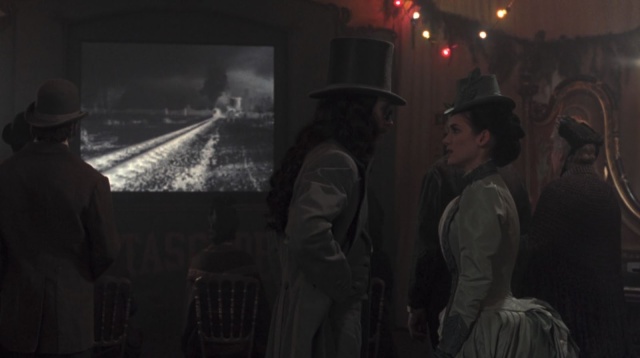 Then there’s Keanu Reeves and Winona Ryder who are outrageously miscast for the project. Phony accents aside, I wouldn’t go so far as to say I hated them in this movie because I actually think they could have been good in a different Dracula project. They just weren’t cut out for this Dracula project, which feels like an unhappy marriage between a studio flick and a pretentious art film. The rest of the cast, with the exception of Tom Waits, is more or less spot on. Anthony Hopkins as Van Helsing is a dream come true, at least when the script doesn’t have him acting out of character, and the movie could have used more of Richard E. Grant, Cary Elwes, and Billy Campbell as Lucy’s suitors. The hunt scenes involving these players really are a spectacle; it’s just everything leading up to these scenes I’m not so sure about.

I guess I should mention Gary Oldman as Dracula, but I really don’t know what to say. He’s good here, I suppose, but I can’t decide if he’s “Gary Oldman good” or if he’s substandard compared to the rest of his filmography. This is at least the second time I’ve seen this movie and I still feel like there was too much stuff distracting me from Oldman’s performance.

Once it gets going, the movie frequently comes close to genuine thrills, but never really delivers the goods until heads are lopped off and blood is spewed at our heroes. The horror elements can be damn near perfect at times and the score is great throughout (I often listen to it while I write). It should be noted there was a fantastic pinball machine based on the film as well. But then the pacing is off and Coppola throws in a handful of what-the-fuck moments for no apparent reason.

It’s a highly watchable movie, but it doesn’t quite reach its potential. Usually I’m interested in seeing a director’s cut, but I’m beginning to think the studio cut of this movie is possibly better; I’m not really sure what Coppola was going for at times. I don’t think he did, either.