Since I featured two new movies in a row, I’m happy to get back to older movies this week. Forgive any typos because I almost forgot to do the Midnight Movie this week. (I’m preparing to go on a trip to Cactus Jack’s tomorrow and I’ve been repairing my first pinball game ever since I got off work today.)

As far as I know, Silent Rage is the only 80s slasher movie which stars Chuck Norris. It’s not a great slasher movie, but it’s a pretty good Chuck Norris movie. In a nutshell, a mad science experiment goes wrong, which makes a serial killer impervious to bullets. That’s right: guns can’t stop him, but you know what can? Chuck Norris’s fists.

The movie opens with an impressive long-take of the killer’s residence. The camera follows him from the moment he wakes up to the second he picks up an ax and murders his housemates. There’s some surprisingly complicated choreography going on here and it involves several performers, three of which are children who manage to hit their marks as well as the adults. In fact, the entire movie looks better than your typical slasher movie, though not as gory as a lot of the other stuff that came out around the same time.

After the murdering spree, Chuck Norris and his police partner Stephen Furst (yes, Flounder from Animal House) arrive on the scene. Flounder acts like a complete dope while Norris, brave as ever, knowingly enters the home of the crazed killer without so much as removing his pistol from its holster. When Norris fails to placate the man, the other police blast him to kingdom come. The serial killer is then taken to the hospital under the care of Ron Silver, who’s probably the best actor in the movie. There, mad scientists spout a bunch of technobabble, talk about revolutionizing medicine, and inject their experimental healing serum into the bad guy’s bloodstream.
You can see where this is going, yes? Like most slasher movies, there’s a kill or two in the beginning of the movie, but we don’t see the killer in action again until the movie’s halfway through. Unlike most slasher movies, it doesn’t bore the ever-lovin’ shit out of you in the meantime. This stuff isn’t high art—nor is it trying to be—and it’s about as cheesy as it can get. But you know what? At least it ain’t boring. Even when Flounder’s jokes fall spectacularly flat, you smile at how genuine it all is.
So it turns out Ron Silver’s sister (Toni Kalem) is Chuck’s old flame from six years prior. They rekindle their relationship (this is where the cheese comes into play) and decide to run off to Chuck’s cabin in the mountains. The killer has other plans: targeting Kalem’s family. 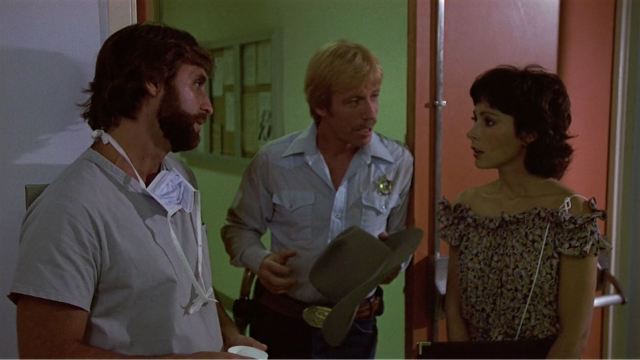 At first it’s hard to put your finger on what makes this admittedly dumb movie work, but then there’s a scene in which Flounder expresses doubts about his ability to handle stressful situations. Whereas the star of other tough guy movies would have treated him like an absolute baby, Chuck comforts the character, assuring him he’s gonna do just fine. You’d expect the “rookie gets killed immediately” cliche, but the movie doesn’t go there, either.
Chuck isn’t a particularly great actor and his fight moves aren’t all that legendary. I can see why some people have trouble understanding the appeal. Sometimes even I have trouble understanding why I like his movies so much. Silent Rage is a good reminder. It’s just a fun little movie.