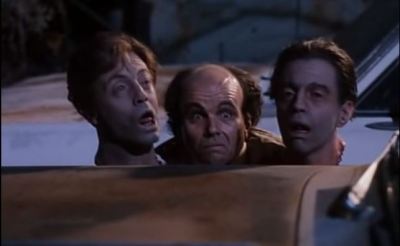 Oh boy, I think I’ve hit my limit. I’ve blown my fucking mind out on bad movies this year. Here’s one so egregious I don’t even want to talk about it. This is the second time I’ve seen it, too. Somehow I remember it being kind of fun. Maybe decent horror was just hard to come by back then. I don’t know.

In its 85-minute running time there are about fifty seconds of awesome. The rest is slow, plodding, and poorly shot, not to mention completely illogical. It’s like one of those “rad” (bad) children films that frequently turned up in video stores in the early-to-mid 90s, only there’s a little bit of gore, which feels like it was only filmed to ensure a journalist from Fangoria showed up to take publicity photos. (The severed heads, by the way, look amazing. Everything else… not so much.)

Clint Howard plays the titular ice cream man. When his character was a kid, he witnessed the so-called Ice Cream King get gunned down during a drive-by shooting. His concerned mother found the boy sitting on the curb, eating an ice cream cone, mere inches from the dead body. The shocked child glanced up at her and asked, “Who’s going to bring me ice cream, Mommy?”

That part was kind of funny, actually. That’s the problem, though: a lot of the movie is kind of funny. It’s just not funny enough. It would have been a lot funnier if they weren’t trying so hard. Those are the best kinds of bad movies: the ones that are genuinely trying to be a serious movie, but totally fuck it up, and Ice Cream Man is nowhere near that. This would have been a lot more watchable, too, if most of the killings didn’t take place off camera. Despite the subject matter, the movie’s so tame I don’t think they would have had to edit much out of it to show it on the USA network twenty years ago.

Anyway, now that he’s all grown up the ice cream man kills children, grinds them up, and mixes their remains into the ice cream he sells around town. Three neighborhood kids uncover his evil deeds and take matters into their own hands. Armed with giant model rockets, they decide to finish the ice cream man, once and for all.

Fuck, haven’t we seen this movie too many times before? It’s the same ol’ shit, only a decade too late and a decade too stale. 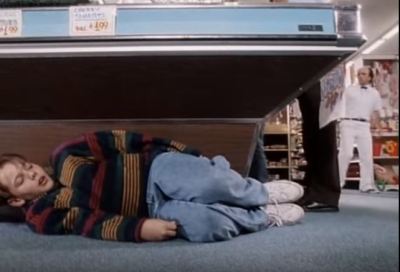 So the main character, whose name is Tuna, is supposed to be fat kid. Instead of casting a tubby kid, the filmmakers cast a skinny kid and stuffed his hooded shirts (remember, it was the 90s) with what appears to be an ordinary bed pillow. The entire effort seems pointless until the supposed payoff at the end of the film: once the ice cream man is dead, Tuna no longer eats so much ice cream and therefor loses all his weight.