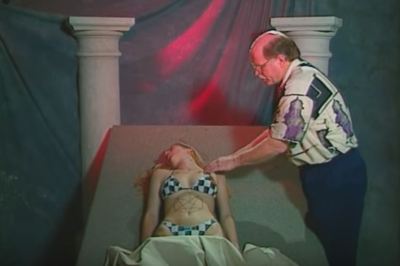 Senseless moral panics will never go away, but the 80s and early 90s did it best, as proven by the following video. From the uploader’s description: “Come, relax and watch a middle aged man point to giant pentagrams on a bikini girl’s stomach while random, creepy synth riffs play in the background.”

Oh, what a delicious slice of cheese.

The introduction has the sweater-clad host inviting us to “pay attention and notice the reverse of everything that is normal becoming abnormal.” What does that even mean? Vague statements like that sound suspiciously like the kind of nonsense you’d hear an actual cultist say.

As expected, the video manages to link Satanism to decorative candles, video games, modern music, homosexuality, pornography, and everything else “concerned parents” wanted to condemn at the time. Then there’s the excessively detailed list of signs that indicate your child may be the victim of a Satanic cult. This list is indistinguishable from a list of “signs your kid might be abused, period,” but the filmmakers seem convinced only Satanists are capable of harming children. 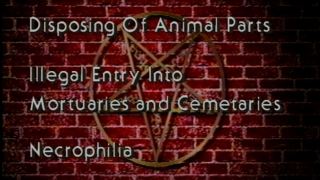 While the Guide to Satanic Cults is chock-full of hilarious (and potentially dangerous) misinformation, the middle section drags. When Joe Dirt’s segment ends, I’d suggest fast-forwarding to the aforementioned “bikini girl” scene (begins at 1:08:57), which is obviously the host’s excuse to touch a nearly naked model. I don’t know how she didn’t crack up laughing when he removed the fitted sheet from her body and I imagine the editors had to use a pretty advanced noise gate to cover up all his heavy breathing.