With the current popularity of lazy pseudo-documentaries, which seem to have more in common with reality TV and self-help books than Morris and Herzog, it would be easy to dismiss a title as sensational as Chuck Norris vs. Communism. I almost did, but films about films have remained surprisingly unspoiled by whatever miracle-woo-bullshit is trending at any given time these days. Film is one of the purest subjects for a documentary, I guess because film is the one subject filmmakers know a lot about.

Following in the wake of American Grindhouse, Corman’s World, Machete Maidens Unleased!, and the highly watchable Cannon documentary, Chuck Norris vs. Communism represents yet another slice of history dealing with the cultural significance of film. This time the focus is on Irina Nistor, a translator who dubbed three thousand bootleg videotapes in spite of her country’s repressive regime. According to one of the film’s subjects: “For regular people, video nights were the one thing that helped us survive.”

The documentary is chock full of endearing quotes like that. Here’s another bit of insight from one of the people involved: “The films changed what you thought, what you were looking for, what you were interested in. You developed through films.”

Set toward the tail end of the Cold War, Nicolae Ceaușescu is the General Secretary of the Romanian Communist Party and shit generally sucks for common folk. Censorship is so extreme, Ceaușescu’s broadcast lackeys are going over every second of television programming with a magnifying glass. They delete anything which might even begin to suggest that life might be better elsewhere.

Although VCRs can cost as much as a car there, people are buying them and showing western films to their friends and family despite frequent raids by the secret police. After the movies, the children go outside to make believe they’re Jean-Claude Van Damme, Sylvester Stallone, and Chuck Norris. Meanwhile their parents draw comparisons between the movie’s injustices and their own.
One interviewee points out that they couldn’t talk about these movies on the bus the next day. There was no telling who’d be listening. No telling who’d turn them in. 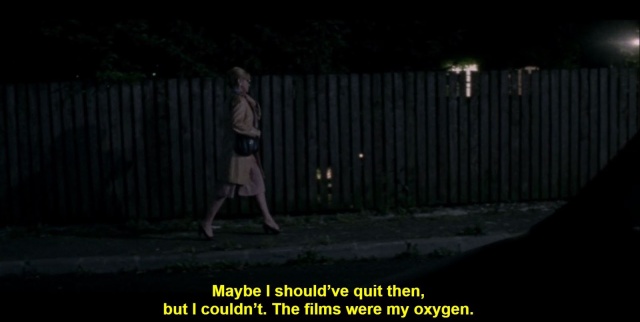 The well-shot reenactments, which make effective use of brutalist architecture, are part political thriller and part espionage (think: The Secret Lives of Others). These taut scenes of suspense are sandwiched in between interviews about how films can and did change people for the better. This is one of the leanest documentaries about film I’ve ever seen. If you love films, you’ll probably love this one.

Cinema obviously wasn’t the only force pressing for the revolution, but it was an integral one.