I couldn’t really remember why I liked this book so much when I was younger and decided to check it out again. 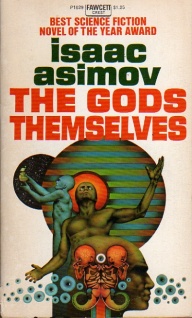 One day, chemist Frederick Hallam discovers plutonium-186… sitting on his desk. The container is marked TUNGSTEN STEEL. As it turns out, aliens from a parallel universe want our tungsten. The physical laws of their universe are different than ours; tungsten to them is as powerful an energy source as plutonium-186 is for us. What the humans set up with the aliens (“para-men”) is a free energy trade: they get our tungsten steel, we get their plutonium-186. And although there is the distinct possibility that pumping resources back and forth will lead to disaster, humanity is too addicted to care. They deny the potential catastrophe. Who’d want to give up free energy?

Isaac Asimov is known for relying on standard prose to convey grand ideas, but here he steps out of his comfort zone (a little) and creates something unusually (for him) literary. In his memoirs, which I read recently, he calls it “writing above my head.” For the first time he writes something which belongs with the then current trend of “New Wave” science fiction. It’s experimental, it’s risque, and it’s anything but golden age.

The book begins with Chapter 6. Then we get Chapter 1, more of Chapter 6, Chapter 2, and so on. When Chapter 6 finally concludes, you get why he arranged the novel this way. And just when you get to know the human characters—poof!—Asimov changes gears altogether and presents us the titular gods themselves: the para-men, who occupy roughly one third (the best part) of the novel’s attention.

The somewhat abstract yet scientifically plausible para-men are as different from any alien ever imagined as they are from the humans. They come in two major categories: the hard ones and the soft ones. The soft ones come in three sexes: parental, emotional, and rational, and it requires all three of these types for the species to breed. The good doctor does something he’s never done before: he writes about sex. And although their sex is vastly different than our sex, he isn’t dodging anything at all even though Asimov himself complains about his sometimes laughable characterizations of sex matters in the aforementioned memoirs.

Despite Asimov’s departure from his usual style, you never forget he’s the man who masterminded it. He’s far too modest when it comes to the quality of his writing, but The Gods Themselves proves he shouldn’t be. Here he proves he is a great science fiction writer. He has said this is his favorite novel of his. Maybe it’s my favorite book of his, too. I don’t know.