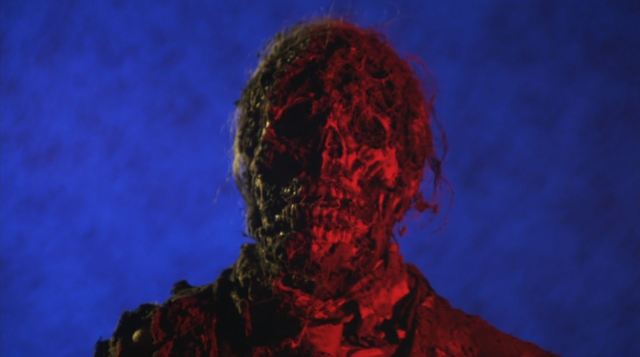 I wanted to end this year’s 31 Days of Gore with something special. The entire month I’ve been carefully considering which movie it should be. It turns out I can think of few movies more quintessential to my childhood than Creepshow. It was probably my introduction to King, Romero, and Savini, it sports an unbelievable soundtrack by John Harrington (which I listen to quite a bit), and possibly replicates the experience of reading an issue of EC horror more accurately than HBO’s Tales from the Crypt. Never mind the fact it barely works as a horror film, it has a killer cast and every person in it knows exactly what kind of movie they’re making, which is rare when you have so many different kinds of actors.

In the container story, an angry father (Tom Atkins) reprimands his son (Joe Hill) for the horror comic he finds in his bedroom. The comic looks suspiciously like Tales from the Crypt, Vault of Horror, and The Haunt of Fear, right down to the style of the advertisements found inside. The father calls it sick filth and tosses it in the trash. Once the boy is alone, he wishes his father would rot in hell, at which point a ghoul appears at his window to tell him the stories from the comic book in person. Cue the opening credits, which are colorful and fun. (Seriously, why do so many modern movies skip the tone-setting credits?) 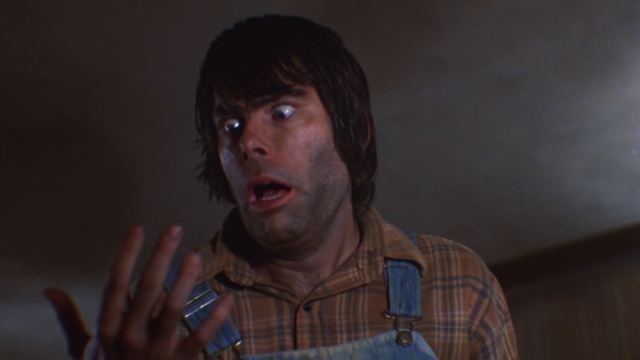 The first story features Carrie Nye, Ed Harris, and Viveca Lindfors, and it’s probably the weakest of the group, but it has a great line (“I want my Father’s Day cake!”) and the hokey feel of a campfire story. I complain about stereotypical characters in horror movies all the time, but these characters are hyper-stereotypical and intentionally so. That’s part of the reason the film is so successful at feeling like the material which inspired it: it revels in being pulp.

In the next story Stephen King plays Jordy Verrill, a country bumpkin who discovers a fallen meteorite. Much like that moment in The Blob, touching the meteorite is a very bad idea; it infects Verrill’s hand with some sort of alien substance resembling chia grass. King might be the worst actor in the entire movie, delivering a performance which would make Jerry Lewis roll his eyes, but that’s not a complaint. He’s obviously having a blast and it’s just as contagious as the stuff growing on his hand.

Following the conclusion of King’s segment, Leslie Nelson gets the best lines of the entire movie in his portrayal of a rich maniac who goes to far-fetched lengths to punish his wife’s lover (Ted Danson). Although he plays it straight, Nelson is doing something completely different than what he did in Airplane and Naked Gun; maybe he’s not as funny here, but he’s definitely the character who made me laugh the most. It might even be my favorite segment of the movie because he’s so cartoonishly evil you can’t help but root for him to do terrible things… so that you can root for terrible things to happen to him later.

It seems that the penultimate story, The Crate, is everybody’s favorite. In it, Adrienne Barbeau (who also appeared in Romero’s half of Two Evil Eyes) plays a loud-mouthed alcoholic whose husband (Hal Holbrook) fantasizes about killing her. Meanwhile, a friend of theirs discovers a mysterious crate beneath the stairs of the local university. I can certainly see why this is the fan-favorite, and it was probably mine, too, at one point or another, but I found this one was the biggest candidate for trimming some of the movie’s two-hour runtime.

The final story the ghoul tells was probably my least favorite as a kid, but I’ve grown quite fond of it. This analysis is at least partly responsible, but I discovered creepy crawlies are much more effective to me now than I was a kid. My girlfriend, who I’ve never known to squirm during a movie (with the exception of Ichi the Killer) almost couldn’t stand to watch it. In it, E.G. Marshall plays a rich and powerful hermit whose sterile home is infiltrated by cockroaches.

I don’t know what, exactly, elevates Creepshow so high above its aspirations, but there are so few things that make me so gleeful. Creepshow 2 ain’t a bad movie either, but the end of that film is where I part ways with the franchise. Don’t ever expect me to feature Creepshow 3 and the internet-only Creepshow Raw… they really are that bad.

That’s it for this year’s 31 Days of Gore. It was the breeziest one yet!