I’m generally a fan of director Brian Yuzna and special effects guru Screaming Mad George. Maybe they don’t make a lot of great movies, but they almost always make movies that are great to look at. As expected, Society is far from being a great movie, but I’ll be damned if there isn’t some great stuff in it. 90% of that greatness comes at the finale, which is far more memorable than the rest of the jerkily paced movie.

Television actor Billy Warlock plays Bill Whitney, a high school student who’s plagued by disturbing visions. (Yuzna credits his inspiration for these sequences to Salvador Dali’s The Great Masturbator, which should give you an indication of how weird Society can get.) Bill confides in his shrink that he believes he was secretly adopted because his family seems so alien to him. He also insists he doesn’t fit in with his classmates, but the scenes in which he’s seen at school are contradictory to this proclamation.

Early on there’s a scene in which Bill catches sight of his sister’s figure through the translucent door of the shower. Something about the image is not quite right, though; as Bill is inexplicably drawn toward the shower, his point of view reveals her anatomy is all out of whack. Later, when he ends up making love to one of his classmates, one of her hands caresses his body in a manner which would be humanly impossible. This is the best stuff the movie has to offer: the surprisingly subtle optical illusions.

What it’s not so good at is its pacing and character development. Bill isn’t portrayed as a teen who’s trying to live his life in spite of his problems. He’s portrayed as a normal teen who doesn’t even think about his problems whenever they’re not actively haunting him. In the normal scenes he seems like a completely different person, entirely unaffected by his life-altering troubles. This has the unfortunate side effect of making the movie feel uneven, as if they wanted half a horror flick and half an 80s comedy. 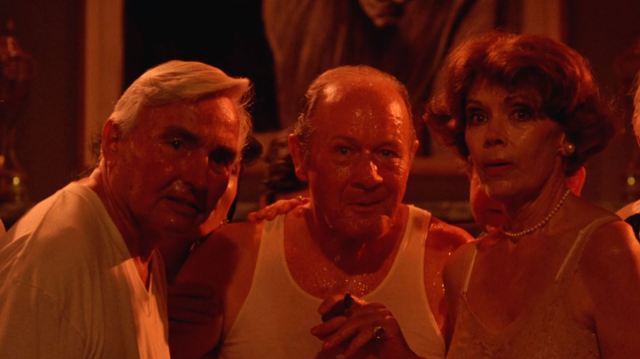 Back to the infamous finale: this is some of the best special effects work you can get, provided you like creature effects and body horror. The pacing still feels a little off, but even I have to admit I’d be dead not to be moved by something so fantastically macabre. I think this could have been a great movie, but they could have easily trimmed twenty minutes to make it move smoother. Also, resolutions like this one don’t exactly mesh with this kind of satire. It’s a cheat when a movie as fucked up as this one takes the easy way out.

Otherwise, there’s something special here. You just have to look for it sometimes.