Not to be confused with the 2014 Julia Stiles film with the same title… that’s a level of horror that’s just a little too intense for me.

The goofy security staff (think: Police Academy) at a haunted high-rise are terrorized by strange happenings. The only man who can help is an eccentric ghost hunter (Stephen Chow) who lives in a mental institution by day and breaks out to fight evil by night.
If you’re looking for character development, motivation, or all the other routine shit that only gets in the way of high-octane entertainment, you’ve come to the wrong place. What you’ll get here is dark humor mixed with slapstick violence and a generous helping of insanity.

Out of the Dark is all about style over substance. Including anything normal would only hinder its furious editing and camerawork, which homages everything from Martin Scorsese to John Woo. It’s also obvious the filmmakers had just seen Pulp Fiction and The Professional. That’s not a critique, just a comment.

I started the movie an hour after I should have been in bed and found myself glued to the couch. It’s the kind of movie that hooks you so immediately, holding it at arm’s length will only exhaust your triceps. Just relax and go for the ride. 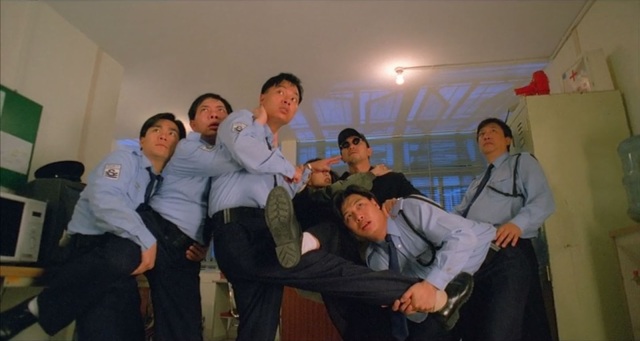 Early on, one of the security officers scoops a dying man up into his arms with the intention of racing him to the hospital. But when a slasher shows up the officer instinctively uses the victim’s body as a shield against the knife attacks—keep in mind, this is all shot like a The Three Stooges bit and it’s no less funny. Later, when the hero of the film bursts onto the scene of the crime to save the day, he accidentally shoots the down-on-his-luck victim.

I kind of regret seeing a movie as good as Out of the Dark so early in the month. Few of the other movies I feature will be able to compete. I’ve always been a cautious fan of Stephen Chow, often loving parts of his films, but rarely embracing any of them as a whole. Here’s one I endorse wholeheartedly as long as you like politically incorrect horror-comedies whose physics resemble a Chuck Jones cartoon. Seriously: a refrigerator falls on a man’s head and he survives with little more than a headache.

Whether you love or hate Stephen Chow’s brand of humor, there’s one thing everyone can agree on: his films are some of the most unpredictable things on the planet.