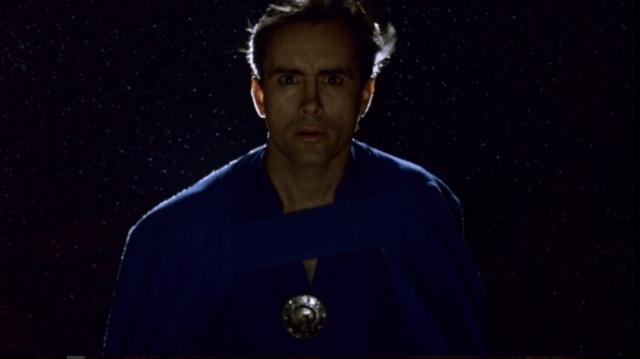 Although the premise certainly enticed me, I distinctly remember seeing Doctor Mordrid at the video store a million years ago, perhaps even picking up the box, but passing it up anyway. To be honest, I didn’t really want to watch it today, either, but Doctor Strange is coming out later this year and I’m reasonably hyped. So I guess it’s time to check out Doctor Mordrid, which entered pre-production as an official Doctor Strange film until directors Albert and Charles Band let their option expire.

That didn’t stop them from making the movie anyway (I wouldn’t expect any less from Full Moon). The character names which would’ve gotten ’em sued have been changed. What we’re left with is a movie about an alchemist (he’s insistent he’s an alchemist, not a wizard) from another dimension. He’s in charge of protecting the film’s MacGuffin, which is known as the Philosopher’s Stone… hey, maybe Full Moon should sue J.K. Rowling!

The “alchemist’s” name is Anton Mordrid. He and his brother Kabal were taught all manner of wizardry when they were children. Unfortunately, Kabal is breakin’ bad now that he’s all grown up and he plans to unleash demons from hell… or something. I didn’t really follow that part, but it’s enough to know that if he succeeds Earth is kind of fucked. Probably. Anyway, when he arrives on our planet he leaves a rash of murders in his wake, which snags the attention of Samantha Hunt, the policewoman who just happens to live in Mordrid’s apartment building.

What develops between Mordrid and Samantha is one of the mildest romances in movie history. You won’t even know they’re attracted to each other until the very last scene in the movie—and even then you won’t really know for sure. Yet what Mordrid suggests to her, out of the clear blue, is the equivalent of popping the question to a neighbor you occasionally see on the sidewalk. I love Jeffrey Combs to death, but his chemistry with actress Yvette Nipar is nonexistent. Considering they appear quite at ease with one another in this behind-the-scenes video, I’m not sure when or how the ball was dropped, but I suspect it has something to do with Full Moon’s speedy production schedule.

Kabal, played by Brian Thompson (you’ve seen him before in movies, but I’ll be damned if I can think of a single one off the top of my head), is just another bad guy. Yeah, he’s evil, but he’s not extraordinary evil and, frankly, he talks way too much to be effective. For some reason his presence gives me more of a Warlock vibe than a Doctor Strange one. Again, here’s another element that could have worked, but it doesn’t.

Look, Full Moon made a ton of movies. They’ve managed to produce a lot more greatness than you would expect from a fledgling studio, so you can’t be surprised when they make a dud like this one. The directors, at that point in their careers, were such experienced filmmakers you can’t even laugh at the movie in a so-bad-it’s-good way. Technically, it’s a well-made film, it just happens to stink. Even if you go into it seeking the hokey factor, you’re bound to be disappointed.