I always thought it was called “Shoot the Dog,” but according to TVtropes, I’m wrong. It’s called “Kick the Dog” and this is how they define it:

Kick the Dog: When a character does something evil for no apparent gain, because the author wants to demonstrate that he’s not a nice guy and shift audience sympathy away from him.

Richard Lynch, who plays the ultra-creepy villain in Invasion U.S.A., does an awful lot of dog-kicking throughout the film. In the opening scene, he poses as a U.S. Coast Guard who welcomes a dozen refugees (who are helpless adrift at sea) before gunning them all down… it’s later revealed he even gunned down the men who helped him gun down the refugees. In his next major scene, he throws an injured woman out the upper-floor window of a building after shooting Billy Drago’s pecker off. Not long after that, he blows up a suburban neighborhood with a rocket launcher while apparently using the infinite ammo cheat. 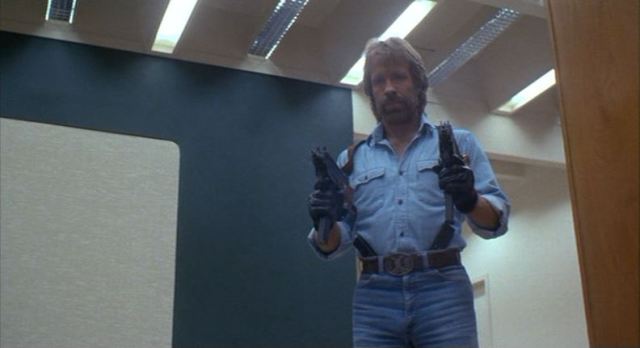 “Don’t forget your gloves, Chucky, or you’ll catch a cold!”
In case you’re wondering why this movie sounds so uncharacteristically expensive for a Cannon film, it’s because the locations were scheduled for demolition anyway according to the documentary Electric Boogaloo: The Wild, Untold Story of Cannon Films. I spoke about it a few days ago and it’s currently on Netflix Instant. You should check it out.
Meanwhile, our reluctant hero is a retired CIA agent living in the Everglades. He’s asked to come back for one last assignment, but refuses on the grounds he’s perfectly happy doing… well, whatever the hell it is he’s doing in the Everglades. As far as I can tell, his life mostly involves driving around aimlessly in an airboat, trapping alligators, and watching an armadillo drink milk from a dog bowl. What’s great about director Joseph Zito is he’s smart enough to limit these necessary but boring scenes. It won’t be long until Lynch’s men show up to kill Chuck’s only friend and explode his house.

Why doesn’t he kill him? Because the movie would have been over then.
Lynch’s master plan involves flooding the United States with a hundred or so terrorists who will pose as policemen and civilians in between random bombings and mass shootings. Keeping with Midnight Movies’ theme this month, this all takes place during Christmas. The only problem is Lynch has nightmares about Chuck Norris every night, in which Norris tells him, “It’s time to die,” before blowing his brains out.
It’s unclear if this event really happened or if Norris somehow read the bad guy’s dream journal. If it really did happen, you would think Norris would feel kind of bad about letting the mass murderer go when he could have easily shot him, but let’s face it: few of Norris’s movies are complex enough to worry about character development and things as inconsequential as feelings.
That’s not really a complaint, either. Back then, we all knew exactly what we were getting from Chuck Norris films and few of them ever promised to be anything more. They did so well commercially because they appeased to moviegoers’ desire to see something stupidly entertaining, the operative word here being “entertaining.” There’s something pure about Invasion U.S.A., which has some amazing stunts, even if the logic leading up to those trailer moments are inexplicable. 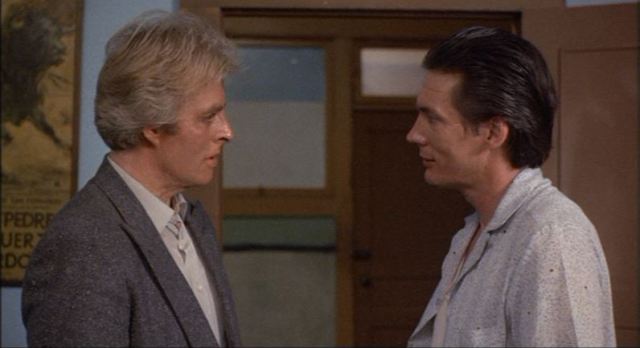 “Are you challenging me to a creep-off?”
Consider the shootout in a mall. Two bad guys come crashing through a plate-glass window in a pickup truck. You’d think after hearing all the gunfire and explosions inside, most of the people in the parking lot would have scattered. Yet a woman pauses to scream obscenities at the henchmen for nearly running her over. Here’s something you won’t see in a Matt Damon film: the bad guys take a handful of her blonde hair and drive off with her hanging from the side of the truck while Chuck Norris pursues them in a commandeered convertible.
The logical thing for the bad guys to do would be tossing the woman into the street in front of Norris’s car, forcing him to screech to a halt, thereby ending his pursuit. Instead, they drive at least a couple of miles with the woman screaming the entire way. You get the feeling that Norris and his brother, Aaron, who were two of the screenwriters, were sitting around a typewriter (or a Crayon and paper), saying things like, “Wouldn’t it be cool if this happened?”

And honestly, a lot of it is cool. Just because Chuck Norris has the emotional complexity of a turd, it doesn’t mean his juvenile and absurdly violent fantasies aren’t valid forms of art. Invasion U.S.A. is among his most stupidly spectacular films.