So if there’s anything 31 Days of Gore taught me, it’s this: I’m a much bigger fan of Full Moon movies than I was when I was a kid. Sure, I said I disliked Seedpeople when I saw it a couple weeks ago, but I somehow don’t regret watching it, either, probably because it gave me exactly what I expected. And hell, maybe that’s why I like Full Moon movies more often than not: I’m never expecting much from them.

Like I said when I reviewed Shrunken Heads, I had no intention of featuring any Full Moon movies this month, but once the seal was broken, I kept getting drawn back to a poster I had seen for Head of the Family. Just look at how awesome the title character is:

I went into Head of the Family without the faintest clue as to what it was about, other than the knowledge the title was literal. I suggest you do the same if you’re no stranger to Charles Band films, but I admit it’s probably a harder sale for most viewers. Allow me to entice you…

Lance is the redneck owner of a small town cafe who’s fallen in love with the beautiful wife of the meanest biker in town. Her name is Loretta and, in perfect B-movie dialogue, Lance describes his love for her like so: “It’s like fucking a firecracker whenever I’m with her.” Lance isn’t very bright, Loretta isn’t either, and her criminal husband is probably dumber than the both of them combined. 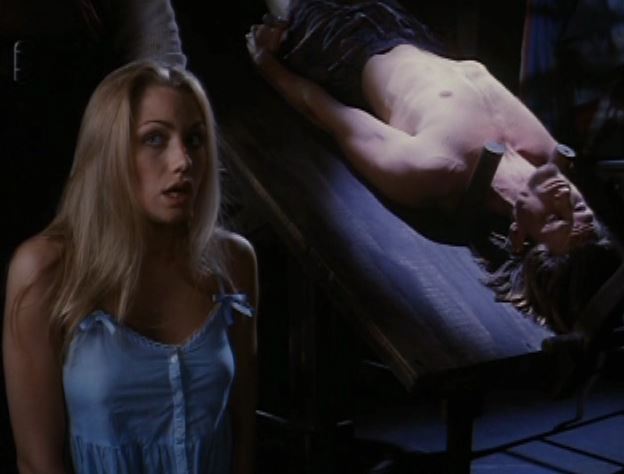 Myron’s also a mad scientist who longs to find a proportionate human body that can support his excess brain power. Like something out of a Roadrunner cartoon, the Stackpools barricade the highway with a sign that detours motorists directly to the front door of their mansion. Once there, the brute of the family knocks them out so that Myron can run human experiments in his basement.

So when Lance stumbles upon the family’s dark secret, he decides to blackmail them. The deal is this: he won’t turn them into the authorities as long as the family offs Loretta’s husband. The head of the family reluctantly agrees. When Loretta’s husband turns up missing as promised, she and Lance could live together happily ever after… or at least until Loretta tires of Lance and his cheating ways. Unfortunately, Lance gets greedy and tries to blackmail even more out of the Stackpools: an allowance of two thousand bucks a week.

This stuff isn’t Shakespeare, but compared to a lot of the movies I’ve watched this month, the dialogue goes above and beyond bare minimum and the acting is as good as it has to be in a B movie… and maybe a little better at times. It’s just a fun movie that I can only recommend to people who smile when they see a giant head rather than roll their eyes.