When a movie has Vincent Price, Clu Gulager, and Rosalind Cash, you don’t need to do much deliberating. Just rent the damn thing. That’s what I did.

Then I groaned when I realized it was an anthology film. 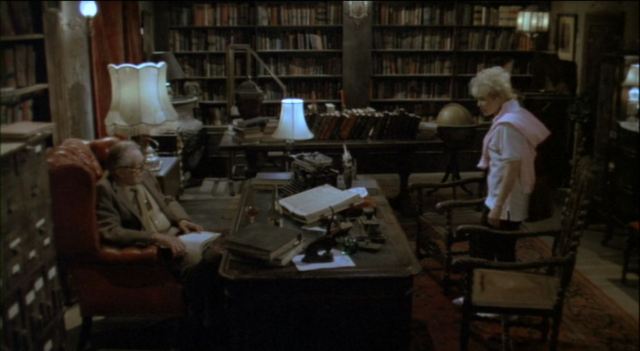 I’m not saying all anthology films suck, I’m just saying even the best ones tend to have at least one shitty entry. The first segment in From a Whisper to a Scream is pretty weak, and it cops out by cutting away seconds before showing us what we all really wanted to see. Nevertheless, the second story tops it. Of course, that’s not exactly hard to do when you set the bar so low right out the gate.

These stories mostly adhere to the EC comics’ rule: something terrible must happen to an innocent person, and by the end the instigator must get what they deserve, usually in some grand, ironic manner. It’s a classic type of horror story, but there’s not much room for suspense. From a Whisper to a Scream tries to deviate from the pattern every once and a while, but when it does the outcome just seems needlessly cruel.

The container story begins with the lethal injection of a deranged woman. A reporter who witnesses the execution later ends up at an old library cared for by Vincent Price. Price tells the reporter the town’s haunted and he presents his case by showing the reporter four stories from various points in the town’s history.

In the first story, Clu Gulager plays the part of a hallucinogenic old man who falls for an uninterested younger woman. In the second story, a gunshot victim played by Terry Kiser (Bernie from Weekend at Bernie’s) ends up betraying the swamp-dwelling man who nursed him back to help. The third story is about a woman who falls in love with a glass-eating circus freak who’s bound by voodoo to remain in the carnival for the rest of his life. Pretty standard stuff.

Then there’s the fourth story. Like I said above, it’s hard to play around with such a simple formula, but when you have a real piece of work like the evil protagonist in this story, you’ve got yourself a good throwback to Vault of Horror and Tales from the Crypt. This one reminds me of John Landis’s entry to The Twilight Zone movie and that episode of Star Trek where they find a bunch of kids running everything.

In it, the insanely prolific actor Cameron Mitchell plays a Union sergeant who doesn’t mind gunning down Confederates (or his own soldiers) even after he’s learned the war’s ended. He and his group of asshole soldiers end up captive in a town run by children. It’s later explained—and this is kind of spoilerish—that the children’s parents were massacred in the war so the kids decided to keep running things themselves and avenging their parents along the way. And when the children reveal the oft-discussed “magistrate” towards the end of the picture, it’s wonderfully bizarre.

As a whole, From a Whisper to a Scream is a pretty solid rental, even if some of its elements are structurally weak. Vincent Price doesn’t seem particularly enthused to be in it and three of the five stories aren’t exactly good. But the story in the swamp and the one towards the end are technical and creative achievements.