I’ve heard a lot about Rock N’ Roll Nightmare and my imagination built it up to be a very different movie. I thought it was going to be a horror version of Flash Gordon involving an 80s hair band descending into hell. I expected Gwar theatrics and scenery straight off of a heavy metal album cover. But considering I’d never heard of the movie prior to the mid-2000s, I figured yet another fledgling DVD distributor found an unseen piece of garbage and was pushing it as a cult classic in close-out stores and truck stops.

Most of my expectations were wrong, which is another reason I try to learn as little as possible about these movies before I actually watch them. Here’s a movie that’s very deserving of its cult status even though I’m still convinced Synapse Films marketed it as a cult classic long before the cult actually existed. If this movie really did have a cult following in the 90s, how is it possible the MST3K guys never featured it? (Apparently there’s a RiffTrax, but that came out after the Synapse release.) 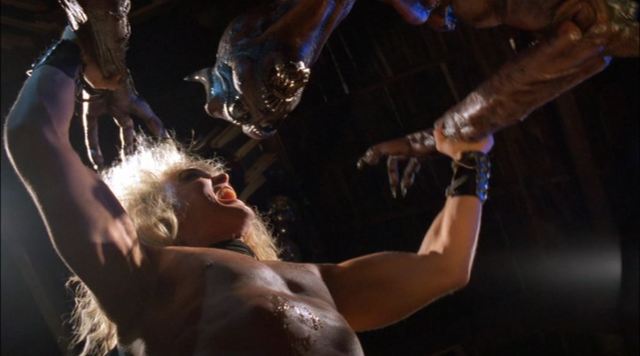 Rock N’ Roll Nightmare is about a band who drags their uninterested girlfriends out to an old farm, the barn of which has been converted into a recording studio. The caretaker tells the band’s manager that the barn/studio has previously been used by Alice Cooper and, if my ears weren’t deceiving me, “Bob” Stewart. What the caretaker doesn’t say is the place is absolutely haunted… only that it isn’t.

I don’t know. It’s complicated, really. To say anymore would spoil it, although I don’t think it would really matter. Then again, the last ten minutes of this movie are so brilliantly unexpected, I’d hate for you to have any of it spoiled (avoid YouTube videos about this movie at all cost—each one I’ve seen so far spoils the climax). It really kind of just goes, “Eh, fuck it. We were making that movie, but now we’re making this movie. So enjoy these flying squids and, uh, here’s some homemade pyrotechnics for good measure.”

The first half of the movie is so tame and wonderfully cheesy, the characters act more like a Christian youth group than a heavy metal band. The sex takes place off camera… until it suddenly doesn’t, and because you were lured into thinking this was mostly PG-rated content, an unexpected shower scene involving a flickering tongue-kiss is jarringly hilarious. Why they wouldn’t cut away before that happened, and then go on to show almost none of the violence, is beyond comprehension.

If you’ve heard of Rock N’ Roll Nightmare at all, you probably heard about how awful it is. Sure, the demons in the film are little more than sock puppets and not only is the acting atrocious (intentionally so, I’m sure), the audio is rarely in sync with the footage. But the movie was shot in seven days and, considering it was little more than a vanity project for its lead rocker (who’s a pretty interesting jack-of-all-trades if you look into his Wikipedia history), it’s way better than it has any right to be. It’s charming as hell, funny, and endlessly entertaining.

And hell, I’ll admit it if no one else will: the music’s just not that bad. Cheesy, yes, but that’s what we all came for, isn’t it?