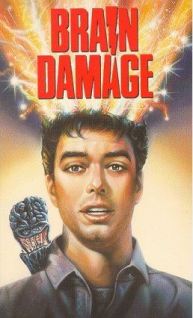 I’ve been a fan of Frank Henenlotter’s Basket Case and Frankenhooker almost for as long as I can remember. How I never saw this one, I’ll never know, but I’m glad I’ve seen it now. There’s nothing as satisfying as a bunch of hookers exploding after partaking in super crack, but it’s a creative little movie to say the least. Although you’ll see recurring themes in Henenlotter’s work, you can’t accuse him of following a formula.

Brain Damage is cut from the same cloth as The Re-Animator and, like yesterday’s movie, it wastes no time delivering the goods. It’s a blunt allegory for substance abuse… and penis. I think. I could be wrong about that last point, but I’m probably not.

I’m getting ahead of myself here.

So the movie opens in the apartment of an elderly couple who keep a mysterious pet in their bathtub. The woman proudly shows her husband the brains she’s just picked up from the butcher, exclaiming, “He’s going to love these!” But when she tries to feed the pet, she discovers it’s flown the coop.

As the couple go from door to door, barging into people’s homes and inspecting their bathtubs, the film introduces us to Brian, the “hero” of the story. He’s fevered and passed out in the apartment he rents with his brother and we never learn why he’s so sick. I’ve read there were supposed to be earlier scenes featuring the character, but they were never shot due to budget constraints.

The missing pet finds its way into Brian’s bed and, concealed by the covers, slithers up his body to attach itself to his neck. This marks the first of many psychedelic sequences depicting the high Brian gets whenever the parasitic creature latches into him. Naturally, Brian thinks the images are pretty damn cool. As he comes back down from his trip, the thing detaches to introduce itself. Through a charming mixture of puppetry, stop-motion and, briefly, rotoscope-animation, we see the leech-like and phallic monster in all of its miniature glory.

The thing’s name is Alymer (sounds kind of like “Elmer”) and it has a smooth, tenor voice, which was apparently provided by John Zacherle (uncredited), host of an old horror show along the lines of Vampira and Elvira. Alymer asks Brian if he’d like to go for a walk. When Brian asks where to, Alymer says anywhere.

That’s when they end up in a scrapyard where Brian gets so high on Alymer’s secretions that he screams about how beautiful all the junk is. This gets the attention of the night guard who comes to inspect the commotion, and Alymer eats the man’s brains while Brian looks on in sick, drug-addled satisfaction. It’s not long before Brian’s addiction starts turning bad, however, and while a lot of directors would have fumbled the ball at that point, Henenlotter keeps it entertaining. Unlike lesser horror directors, who heavily pad the filling in between kills, Henenlotter never dwells, never dawdles.