Harry Knowles proclaimed the killer in Hatchet would be “the next icon of horror.” It’s safe to say Harry jumped the gun a little. Maybe Victor Crowley is more memorable than your usual villain, but he’s certainly not on par with Freddy Krueger and Jason Voorhees. Nonetheless, Hatchet is still better than a lot of Freddy and Jason sequels.

Hatchet opens with Robert Englund (Freddy Kruger) playing a hillbilly who’s hunting gators in a New Orleans swamp. Instead of letting Englund and Kane Hodder (Crowley) share screen time, Englund’s character is killed off screen. Talk about wasted opportunity. Tony Todd (Candyman) makes a cameo later on and you can practically read his thoughts: “Why am I in a fucking talky scene? Couldn’t they at least give me someone to kill?”

That’s among my biggest beefs with the original Hatchet: there’s so much cool stuff in it, but most of the time it reaches for greatness and stumbles over juvenile creative decisions. I’ll give it a pass for not putting Englund and Todd to better use—the filmmakers probably didn’t have the money to use the icons for anymore than a day or two of shooting.

Despite the crappy production values, you can tell it’s a labor of love. I actually like horror-comedies, but holy hell, the jokes in Hatchet are bad. The only thing I hate more than “comedy” which arises from characters being inexplicably clumsy is forcing characters to say completely ridiculous things just for the sake of being funny. “Hey, it’s like that time you caught crabs!” “What’s 911’s area code in the south?” Holy shit, the humor sucks. When one character tells another to blow her dad, the response is, “I will as soon as you’re finished!”

What really hurts is there are actually some actors here who are capable of comedy. Joel Murray (Bill Murray’s brother, a godsend in God Bless America) and Richard Riehle (the guy who invented the “Jump To Conclusions” mat in Office Space) have much bigger roles than you would expect, but instead of elevating the material, they’re bogged down in the mire of forced jokes. Beyond the over-the-top kills, I laughed only once. The scene responsible involved a close-up of a very attractive woman scratching her crotch in a very unladylike manner.

So are the kills any good? Oh boy, you’d better believe it.

The sound effects are great and the splatter is pitch perfect. I’m only disappointed there’s so little of it. We get a decent kill right out of the gate, but the movie drags and drags until the next one. In case you’re the type to fast forward through the boring parts, I checked: the movie doesn’t pick up again until the 49-minute mark. But man, I’ve never seen a belt sander used like that before. And what Victor Crowley does with his bare hands is downright glorious. You can tell that’s where the majority of the budget was spent. It makes an otherwise shitty movie worth the rental price.

So yeah, Hatchet is a movie gore aficionados have to see. Everyone else should probably skip it. Why it took me nearly ten years to see it is hard to explain… it’s just one of the ones that got away, I suppose, and frankly, I dislike most horror films made between 1999 and about 2010 so I pretty much learned to stay clear of them. But if you’re just looking for an all-star horror film, Wishmaster was much more effective at delivering the goods in my opinion.

The Burning is one of my favorite slasher films

It’s worth noting I was frequently reminded of the movie that more or less built Miramax: The Burning. Like that film (and some spoilers for both movies follow), I felt sorry for the bad guy the way we felt sorry for Frankenstein’s monster. Hatchet’s origin story also involves an accident with fire and the directors of both films concoct far-fetched ways of setting their antagonists ablaze in the climax. I’m fairly desensitized to this stuff by now, but setting a burn victim on fire just seems cruel, man.

Spoilers below. It’s impossible to talk about the sequel without spoiling the first one.

I love it when a sequel picks up where the original left off. Like Back to the Future 2 and Waxwork 2, Hatchet 2 not only picks up exactly where the original left off, it replaces its lead female with a different actress. This time Marybeth is played by Danielle Harris. Harris is not the best screamer in the world, but she exudes all the other qualities we expect from a scream queen, which is pretty rare these days. You’ve seen her in movies going back as far as Halloween 4 and The Last Boyscout. Any fan of modern horror films will probably recognize her and she’s very good at what she does.

When we last saw Marybeth, she’d been caught in the killer’s grip, presumably doomed. Within seconds of Hatchet 2’s opening, she gouges one of his eyes out, affording her a chance to swim away. One pathetic jump-scare later she’s rescued by the piss-drinker from the first film. Already the film looks better than the original and although the lame jokes are still present, there aren’t as many of them and there are some okay jokes, too. I’m guessing the director stopped smoking so much pot before he made this one.

The piss-drinker tells Marybeth not to call the cops (because that’s certainly logical) and sends her on her way to Reverend Zombie (Tony Todd) who also tells her not to call the cops. Instead, he assembles a ragtag crew of hunters in a scene which involves a Lloyd Kaufman cameo, but not before expanding on Crowley’s origin story from the first film. This flashback sequence is a little too long, but you know what? I’ll be damned if I wasn’t just a little captivated by Crowley’s origin and it’s not often you get to see Kane Hodder without masks or makeup in movies like this.

Although the sequel takes even longer getting to the inevitable scenes of mayhem, it’s not as boring getting there and the payoff is so much sweeter. The best part is Todd and Harris have a hell of a lot more screen presence than the leading actors in the last film.

So when asked why he wants to bring so many hunters along, Tony Todd’s character replies, “Safety in numbers.” Of course, within minutes of arriving at the swamp, Todd tells everyone to split up. Yeah, it’s one of those movies, but we actually want them to split up so the movie can get to the good stuff. The inevitable sex scene which results from such a bad decision had me dying with laughter. It’s like something out of Eli Roth’s Thanksgiving trailer and, uh, the sound effects of the copulation itself are… well, let’s just say brilliant. This sex scene also provides one of the few dialogue jokes that work in the entire movie.

My favorite part is when Crowley storms out of the woods with a hilariously long chainsaw. I mean, holy shit, just look at this: 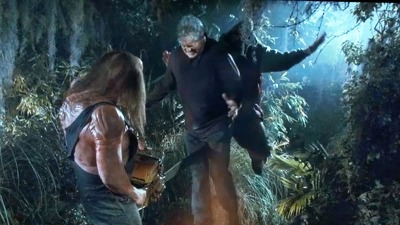 two for the price of one

To say Hatchet 2 is an improvement is an understatement. It’s easily twice as good as its predecessor. That says more about how disappointing the first one was, but any old school horror junkie should see it.

I had a blast. And at this point I couldn’t wait to see the next film in the series. So much so, I started it immediately after watching this one.

I wish I could say Hatchet 3 is three times as good as the first, but I can’t. It’s still better than the first film and I can’t say I would have been disappointed if I had gone to a theater to see it. Gone are the really lame jokes (for the most part) and we finally see cops enter the mix. Although cops were strangely absent from the first two features, this time there are a few too many of them and they’re a little too competent to retain the 80s throwback vibe.

Again, the filmmakers pick up exactly where they left off. Shell-shocked from the events of the last two films, Marybeth scalps Crowley’s dead body and wanders, in a daze, into the local police station. After a firehose-shower scene (which bares surprisingly little), she’s thrown into a cell where she tells the sheriff (Gremlins star Zach Galligan) her story and where to find the twenty or thirty bodies from the previous films.

Although Hatchet 2 was enhanced by the fact it had a kick-ass heroine, this one seems determined to keep its most interesting character locked up. Minor spoiler: her handcuffs don’t ever come off until the end of the film.

I expected to see Galligan and Harris share more screen time. I was disappointed they go their separate ways early on, thereon appearing to be in entirely different films. The stuff with Galligan is what horror fans wanted to see. The stuff with Harris is meandering bullshit with too much talking. Why is it that so many genre films pretend they don’t want to be taken seriously, then go and throw in ungodly amounts of by-the-numbers exposition into them? When will these movies finally realize they don’t need to be anything like a “normal” movie? There’s just so much padding here—stuff we’ve seen in a million other movies.

As for Galligan’s half of the film, there are a lot more kills and a lot less gratuitous nudity (practically none at all), but the saddest adjustment to the formula is it just doesn’t pack the punch that part 2 did. I was legitimately excited when I saw Tony Todd’s character go mano a mano with Crowley in the previous sequel, but there’s nothing as exciting in this one. Sure, I loved what Crowley did with a defibrillator, but if the filmmakers really think a belt sander can produce that many sparks, they need their heads examined. (Okay, I admit: the sparks looked pretty damn cool).

Hatchet 3 is a prime example of quantity over quality. The gore gags, as always, are top notch, but Crowley is getting fatigued. He’s less likely to take his time. More likely to just rip off your head.

Hatchet 3 is not a terrible movie for gore junkies. I’d be interested in a fourth entry, but let’s face it, it’s probably only downhill from here.