If you don’t see me around much this week, I’ve got a bit of a project on my hands: 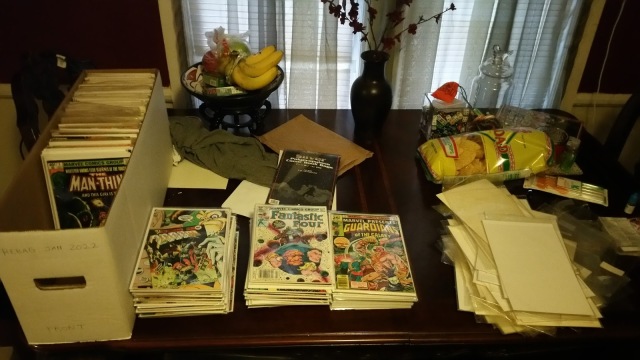 I swapped out the bags and boards on a hundred issues today (the three stacks in the middle) and have about four hundred more to go. This is not my favorite activity in the world and I don’t envy anyone with a bigger collection… well, I do, but not when it comes to doing this. On the bright side, I shouldn’t have to do this again until 2022, at which point I hope I have enough money to switch to mylar.

I would tell you all about my key issues and prized possessions, but I just collect what I liked when I was a kid and what I would have liked as a kid. 2000 AD, EC horror and science fiction reprints, Jack Kirby, Steve Gerber, Marvel’s What If…?, stuff like that. Mostly silver and bronze here and these days I rarely buy anything if I can get it digitally.

So yeah, I probably won’t post much this week, but I do have plans for Western Wednesday this week and next.

Speaking of EC horror, M. Night Shyamalan is apparently reviving Tales from the Crypt… and it doesn’t look like it’s going to be on HBO or feature the Crypt Keeper. I think the article I linked to says it best for me: “Meh.”