Skip to content
Grant Scams, Science, Science Fiction, TV August 16, 2014December 18, 2017
I haven’t had cable in so long I didn’t know how bad the networks’ programming had become. Yeah, I’ve heard of such bottom-of-the-barrel scrapings as Ancient Aliens and Finding Bigfoot, but I assumed nobody actually bought into that stuff outside of the Weekly World News readership. All but the hopelessly gullible will know the Ghost Hunters stuff is faker than suntan in a bottle, but according to the video above it appears a megalodon program was carefully constructed to trick even objective viewers. 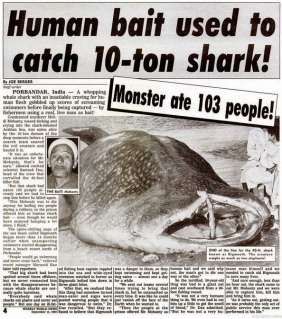 your typical Weekly World News article
Neal Stephenson insisted that a hundred years from now, the majority of people might think the moon landings were faked. I thought that was farfetched, but now I’m not as optimistic. Cable networks are really turning to shit in the factual accuracy department and they’re among the biggest opponents of net neutrality in the world. If we lose internet freedom (and there’s a huge chance we will lose it), does anyone think the “educational” programming on privately owned television networks will suddenly get better? It’s hard to imagine cable programming getting any worse, but they have always found new ways to lower the bar just a little bit more.

It will get worse and there’s currently no sign it will ever get better. Let’s not pretend it’s completely Discovery Channel’s fault. Obviously someone’s watching this stuff. At least a few of them believe every bit of it, too. If the internet becomes what the major telecoms want it to become, I believe Mr. Stephenson is right: people will be watching a lot more cable TV, not to mention visiting the kinds of websites put out by the same people who control cable TV. That’s gotta have a negative affect on the average humans’ bullshit radar in the long run.