Skip to content
Grant Cyberpunk, Movies, Science Fiction December 5, 2013December 18, 2017
If you needed a reminder of why it’s simply human to love the movies, here it is. Basically it’s a trailer of all the trailers of 2013. Even the movies I didn’t like give me chills when presented in this form.
* * *
I just realized I never properly wrote about Pacific Rim. Let’s be clear: I hate disaster movies as I’ve said so many times before. I hated the American version of Godzilla, I hated Independence Day, and I hated just about every other modern film that destroys recognizable landmarks ad naseum. On the other hand, I love proper mecha, monster movies such as the real Godzilla, and all things Ray Harryhausen (speaking of Ray, the best documentary on him yet is currently on Netflix). Couple that affection with the fact that Guillermo del Toro hasn’t made a bad movie ever and you can probably already see where this is going…
I loved Pacific Rim. It would be easy to dismiss it as a typical Hollywood action movie for kids if you’ve A) never seen it or B) don’t enjoy the films it tributes because you’re a pill. For the rest of us, however, it’s the real deal. The awesome (in the true sense of the word) music, the convincing special effects, and the playful absurdity of it all had me smiling like a kid for ninety minutes straight. Sure, it’s preposterous, but it knows it’s preposterous and it’s just too fun and upbeat to poke holes in it the way we did in the boringly morose Man of Steel. It also has some near-cyberpunk visuals as demonstrated by this image: 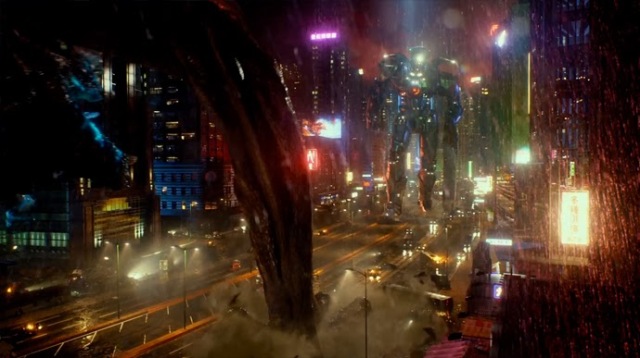 The colors, man, the colors!
Here’s a movie that doesn’t cut every three seconds as if the director is on crack. Here’s a movie that doesn’t relegate every country other than America to the sidelines. Here’s a movie that’s so colorful it’s easily one of the ten best-looking films I’ve ever seen. Some have complained about the lack of female characters. Well, there’s at least one great one in it and let’s face it: it’s fucking sea monsters versus mechs… it’s for the twelve year old boy in all of us.
I could have written about this movie in depth, but it’s no longer fresh in my memory. Perhaps sometime in the future I will revisit it. And if del Toro directs the inevitable sequel, I’m there, dude. In the meantime, check out The Host if you haven’t seen it yet. I believe it’s on Netflix and like most of the Korean films that actually get imported, it blows the American stuff out of the water.