For those of you who don’t know, I decided to go as a generic blade runner for Halloween. Since I didn’t have $500+ to drop on a decent replica, I decided to build my own. The result was… well, you be the judge.

So here’s the gun I started with:

And here’s the gun I ended up with: 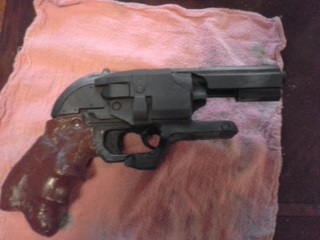 Obviously I’m no model maker, but for a first prop-building project it ain’t all bad. The first thing I did was grind off the raised-lettering and paint it. The problem with that “build” wasn’t just the fact it was lazy, it wasn’t very custom. So I decided to take it apart, remove all the innards (save the trigger and the cylinder), and start sawing and grinding away: 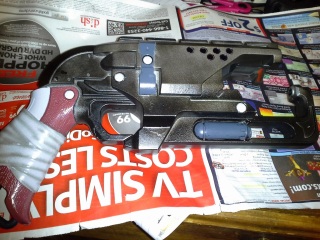 Here’s how I made room for the additional trigger:

And here are the two halves, which were flimsy as hell. It felt like they could snap at any minute:

Here I used a Dremel to cut in some details:

I robbed extra parts (the slide) from the Airsoft pistol on the left: 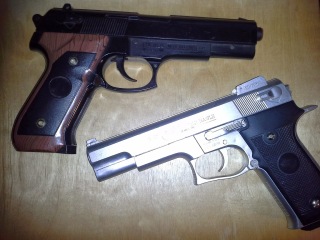 You can see how I carved it below: 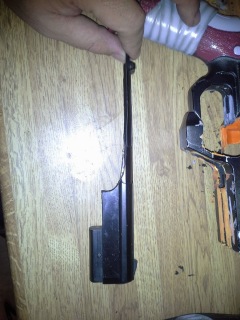 Fitting it all together… still very flimsy at this point:

Time to bulk it up with some plumber’s putty. By the time I had it stuffed down into the handle, the gun not only felt solid, it felt about as heavy as a real magnum. No joke. 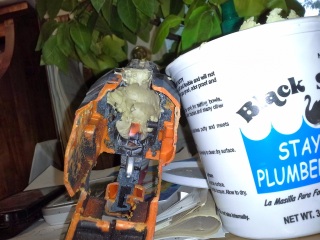 I needed a barrel that fit through the slide and helped hold the cylinder in place. Turns out Cover Girl offers a perfect solution:

The cylinder pin was a shelf peg, cut to length: 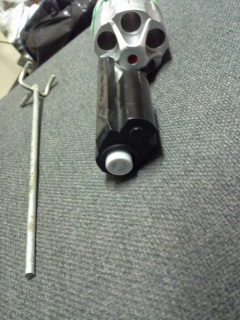 I had planned to use fiberglass resin to fill in the holes and such, but this Bondo putty was cheaper. I put a glob on the handle and squeezed it with my fist to make the perfect grip. I also super glued a second trigger into the assembly:

Here it is drying. After this it was sanded and painted: 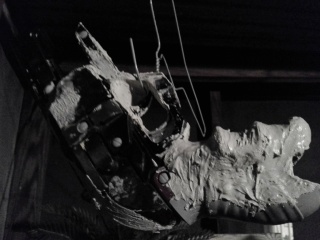 So yeah, it doesn’t look quite as good as most any of the other blasters floating around out there on the web, but damn it, this one is mine. I hope someone else gets some useful ideas for a project. This is what I’ll be taking to the costume ball I’m going to, but I’m possibly in the market for a better one.