Two nights ago a hell of a storm hit Tulsa. Here are some pictures of the devastation: 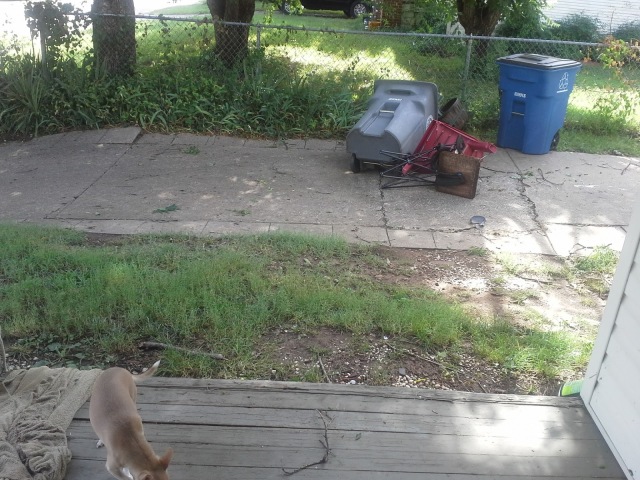 I used to have my own classification for storms:
F1: No visible damage.
F2: Trashcan lids flipped.
F3: Trashcans knocked over.
F4: Porch chairs moved.
F5: Chairs off porch.
Recently I had to add a newer classification, F6: Chairs and trashcans moved across driveway. You can see two chairs in the picture above. The third one is in the trashcan. I’ve also heard rumors of an F7, which is when a tornado contains living, vicious sharks, but these are more probable in Los Angeles.
my mother raved about how stupidly entertaining this movie was

The only thing left on the porch was the towel you can see beside our dog, Napoleon. That towel wasn’t there when the storm began. More destruction came in the form of downed limbs:

my poor bbq grill
The real damage was done to my computer. Yes, it was on a surge protector. Yes, most of the important information was backed up. In fact, when the power returned in the morning, the first thing I did was make sure my computer was okay. It was. Feeling like I dodged a bullet, I decided to install a spare hard drive to copy over a bunch of newer files for safekeeping. While I was rebooting after the hardware installation, another power outage struck. This time when the power returned, my computer was stuck in a boot cycle that even Hiren’s BootCD couldn’t fix.
My hard drive was a goner.
Now, I’m used to hard drive failures because for some silly reason I bought an HP tower (which has since been Frankensteined into a fairly bad ass machine, not including the somewhat sketchy mobo that has no English documentation anywhere on the web). I was on my third hard drive when technical support asked me to renew my warranty. I kindly told the Indian on the phone no, I would rather just buy a new internal hard drive rather than continually receiving the model that’s known to be a faulty piece of shit. (HP knows it’s a piece of shit and yet they keep sending it to customers, although I’ve read rumors it’s actually the mobo that fucks up the HDD.)
I prepared for the inevitable HDD crash by buying the new hard drive during an Amazon sale a year and a half ago: 3 terabytes of awesome goodness. It was a mechanical drive, sure, but at seventy-something bucks it wasn’t a bad purchase by any means.

Problem is, my BIOS and motherboard don’t like 3tb drives and refused to install Windows to the HDD I bought. Sure, it’ll work fine as a storage drive, but not as a boot drive. So I grabbed a solid state drive, which I love. It took around ten minutes to install Windows, ten more to go fetch my drivers and preferred browsing apps. Now, less than an hour later, I’m writing this post.

Which reminds me about my luck with computers. When I was in high school I had a Gateway computer. I kept that piece of shit running for years through frequent maintenance and replacing of parts. One time I asked for help in an online technical support forum and one of the replies accused me of lying. He said, and I quote, “There’s no way you have that model and it’s still running.” In fact, I’m sure it’ll still run today; it’s in my computer nursing home at the back of my office closet.

Anyway, if I have enough time (I probably won’t) I plan to get Shadowrun Returns sometime tonight and review it here. So keep an eye out for that; I’m sure I’ll get my hands on it and write about it sometime before Monday. Although I actually own vintage Shadowrun books, I’ve never played the tabletop game… or any tabletop game for that matter. I did have a childhood obsession with the Sega Genesis version and I’m no stranger to the SNES version, either. We’ll see how it holds up, but I should warn you I kind of liked the FPS that came out not too long ago. You know the one that everybody hates? So hey, what do I know?